Sign in  Register
Give Your Comments
NewsletterClose
Culture / What's On

When the Spirit Moves You 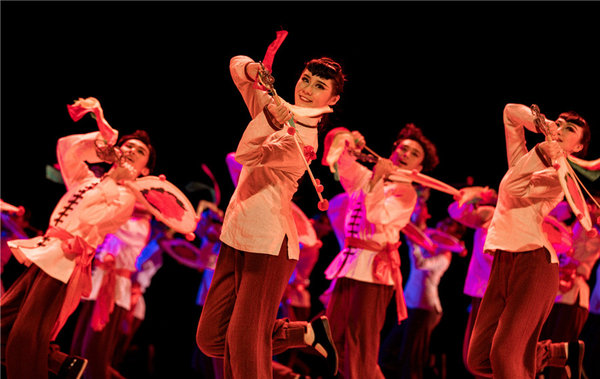 Students from the Beijing Dance Academy perform a Taiping drum dance, which is popular in the Mentougou and Shijingshan Districts of Beijing, at this year's installment of the Chen Xiang series at the National Center for the Performing Arts. [For China Daily]

The capital played host to the fifth installment of the Chen Xiang folk series.

Before a show at the National Centre for the Performing Arts on May 21, groups of artists in ethnic costumes began dancing jovially in the theater lobby, turning the space into an unlikely venue for an impromptu celebration of folk culture.

The dancers were students from the Beijing Dance Academy's Chinese Ethnic and Folk Dance Department. Under the instruction of teachers from the academy and local dance inheritors, together they presented the fifth installment of the academy's folk dance series, Chen Xiang, on May 21 and 22.

Chen Xiang is a series of dance galas that started in 2014, where each production presents around a dozen folk dances, most of which belong to Chinese minority ethnic groups. Literally, chen xiang here refers to the obscure charms of historic art forms. 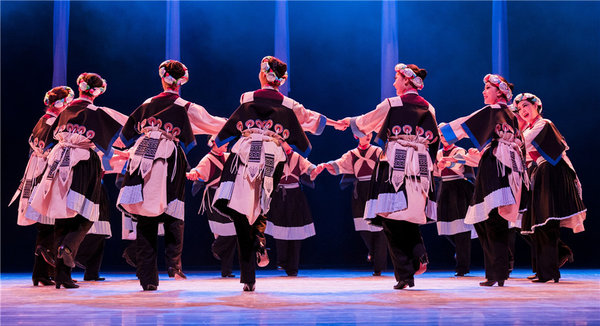 The performances include a dance of the Naxi ethnic group. [For China Daily]

At the curtain call, the local inheritors of these dance styles also took to the stage with the students, offering the audience an authentic taste of their folk culture.

The performances included a Taiping drum dance, which is popular in the Mentougou and Shijingshan districts of western Beijing and was listed among the first batch of national intangible cultural heritage in 2006.

The inheritor, Gao Hongwei, says the dance style was particularly popular among his grandmother's generation. At the time, the locals would gather in the fields, dancing and drumming as a form of entertainment.

"The greatest characteristic of this dance is the unity between the performer and the drum. The performer needs to dance with the drum and drumstick in their hands and play at the same time, so the drum appears to fly around the dancer," Gao says. 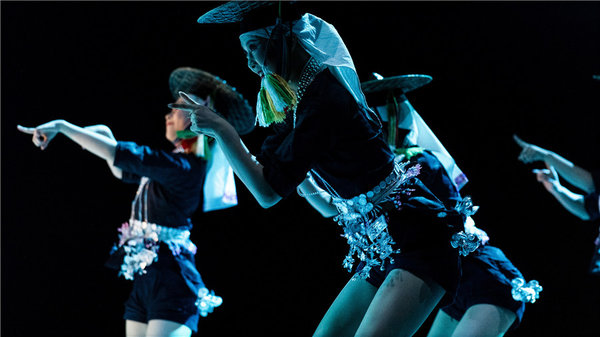 A folk dance from the Hani ethnic group of Yunnan province expresses the longing for love. [For China Daily]

Having provided dance training to the university students for over a year, Gao says that they now have an overall mastery of all the elements of the dance and the project has had a substantial effect on the inheritance of intangible cultural heritage.

Since 2017, the project has been led by Huang Yihua, director of the Chinese Ethnic and Folk Dance Department. Under her advocacy, Chen Xiang has been incorporating folk dance forms from other countries, in particular countries involved in the Belt and Road Initiative. For example, the fourth installment of Chen Xiang included a traditional dance from Romania.

Continuing this approach, this year's compilation includes two dances from foreign countries, one of them being the Serbian traditional folk dance, kolo, which was chosen by teachers at the academy who visited Serbia on a field trip.

Yuan Jia, a teacher of Chinese ethnic and folk dance and a tutor at the dance rehearsals, says the group from the academy found many similarities between the Serbian and Chinese folk dances. 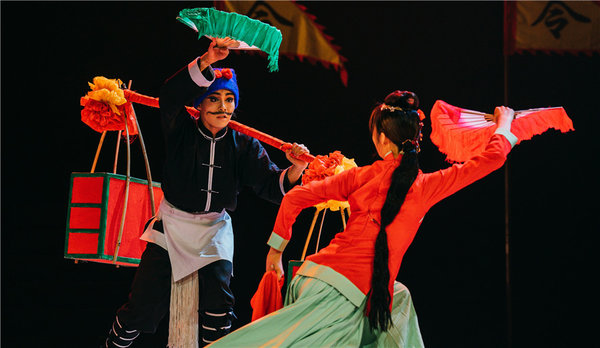 The Yangge dance from Haiyang, Shandong Province, is among the four dance styles from the Han nationality in this year's production. [For China Daily]

"Like most folk dances, which are usually performed during a harvest or at a festive occasion, it also expresses a kind of wish for auspiciousness. The state of the dancers, and their expression, is one of excitement, joy and composure," Yuan says.

Huang says that she was touched to learn that the folk dances from foreign countries often express similar sentiments to Chinese folk dances, such as the longing for love and peace. "Although our aesthetics may differ somewhat, we have the same dreams, the same emotions."

Huang says the academy adopted two approaches to help the students learn the folk dances. For some forms of dance, students took part in field trips to learn the dance moves and their cultural origins. However, due to the great number of students participating in the project, for other dances, the academy invited the local inheritors to Beijing to instruct the students. 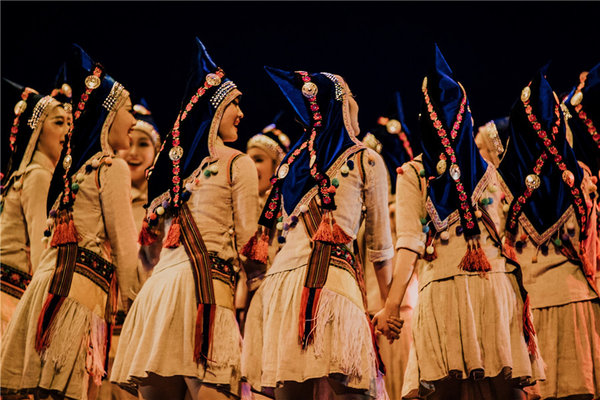 Liu Yangjie, a senior student at the academy, has been studying Samul nori, a Korean folk genre that combines music and dance, from Chinese teacher Chi Dongdong since her sophomore year.

Liu says that receiving instructions from a local inheritor has deepened her understanding of the art form. Especially for this year's project, the academy invited a representative dancer from South Korea to instruct the students.

"I feel that I can present the art form more accurately. It's more than just technique. As performers, we need to have the urge to present it from the bottom of our hearts, just like the inheritor," Liu says. "He (the dancer) has devoted over 40 years, nearly his entire life, to the art form, and I respect him very much." By combining research, tuition and performance, the project aims to involve more students and teachers in the preservation of folk dances, while bringing declining art forms to a wider audience.

"As an institute of research and education, we have a duty to continue with this project to study the ways of inheriting folk art, as well as learning the art forms themselves," Huang says.