Chinese Opera Gets a Modern Storyline 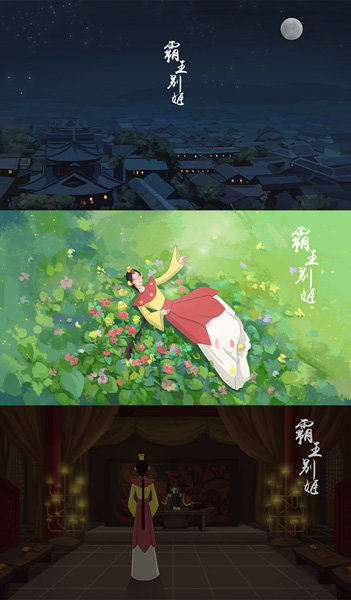 Scenes from Farewell My Concubine, an animation film by Wang Sheng. [For China Daily]

Traditional Chinese opera is high art in which roles, voices and even movement are rigorously regulated, but university students are trying to infuse it with pop culture and the concerns of everyday life to make it more accessible. Art, they believe, at its best, reflects the culture of the moment and traditional opera is ripe to be revitalized, through modern technology, to reach a wider audience.

University graduates from the New Media Arts Department of the National Academy of Chinese Theatre Arts showcased their creativity at the 798 Art Zone during their 2019 graduation exhibition. They combined Chinese opera with new media and innovative technology with an approach that combined hard work with vivid imagination.

For Guo Yanhong, a recent graduate majoring in digital media, technology can help popularize the art form among those who have never had the opportunity to learn about its relevance, particularly people with disabilities.

The idea evolved when she was an undergraduate, volunteering to help people with visual, hearing or speech impairments.

"They asked me which university I came from, and when I told them, many said they were interested in Chinese opera, but sometimes had trouble understanding the meaning of the lyrics," Guo says.

With a graduation project approaching, she realized the importance of interaction for a potential new audience.

She established three webpages. The first allows users to read the lyrics and their meanings line by line; the second introduces the lyrics to those with impaired sight; and the third helps those with hearing loss.

To get a better feel for the subject, literally, she learned Braille, transcribing and printing the lyrics of the arias so the users can "listen" through touch.

Guo also wants to allow those with impaired hearing to better appreciate Chinese opera, so she set up a webpage with videos displaying lyrics in sign language. 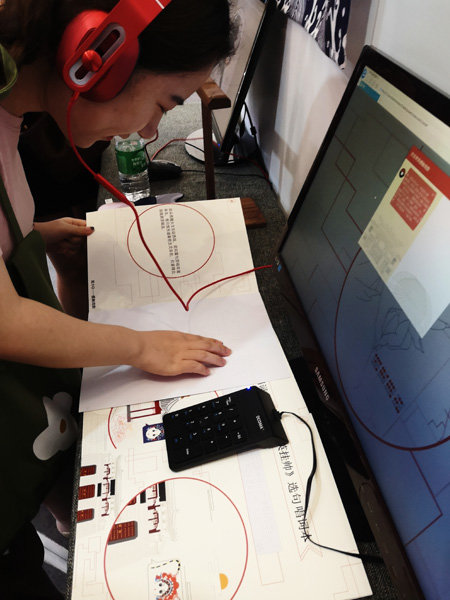 A visitor listens to the Chinese opera and touches the lyrics in Braille thanks to Guo Yanhong's webpage design. [For China Daily]

Still not content, she wants to further adopt new technology to the traditional art forms. "I would like to one day present my design through a mobile app. With touch screens or voice recognition, the app can be operated easily."

Making a game of it

Other students have researched ways to popularize traditional opera among children and teenagers, who may not be familiar with the art form and possibly think it obscure and irrelevant.

Zhang Bo, a student of digital media art, designed a life-size interactive board game using augmented reality technology that serves to be both educational and entertaining.

The storyline of the board game is based on Uproar in the Underworld (Nao Difu), one of the three classical Peking Opera works centered on the fictional character, the Monkey King.

Her design has all the elements of a classic board game brought to life-a game map printed on a square blanket, a huge dice that can be used as a stool, and a set of cards that have hidden information to be deciphered with the game's exclusive mobile app.

Interaction is a key element in Zhang's conception, so she ruled out other forms of traditional tabletop or online games. "It feels so pleasant for people to sit together on the blanket and chat with each other while playing," Zhang says. "Now, everybody's online all the time, so it would be good if my game could help people communicate."

If a player rolls the dice and lands on the question mark, they will get a question card. By scanning the cards with the mobile application, questions will pop up on the screen, some of which include images. Answering the questions leads to rewards or penalties.

"My vision is that during the playing process, players would gradually remember the answers to the questions, and hopefully they will be intrigued and want to know more," Zhang says. 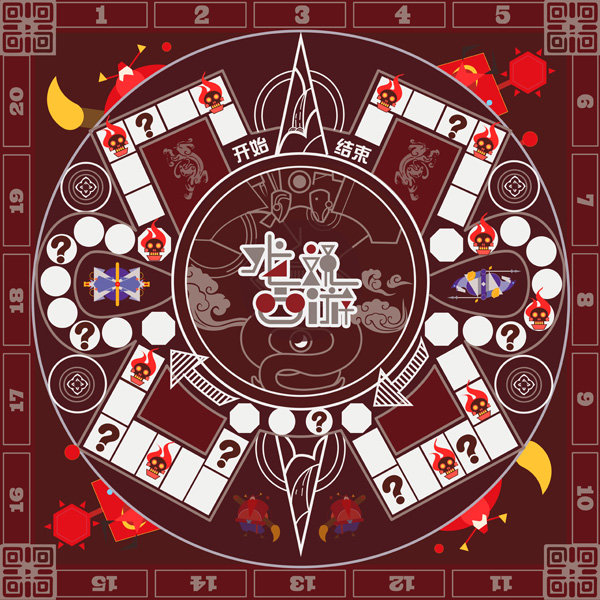 A board game with a Monkey King theme designed by Zhang Bo. [For China Daily]

"From my research," Liu says, "I found that most of the early education products are based on cartoons and stories. I have also learned that our traditional opera has a lot of interesting stories, so I thought I could use the characters and stories of Chinese opera to help children learn about the art form and in a way inherit traditional culture."

The learning machine is complemented with jigsaw puzzles of these characters.

"By putting together the jigsaw puzzle, the kids can soon get a basic understanding about the appearance of each character," Liu says.

The users can also use the machine to scan the puzzle, and the 2D character would transform into a 3D one on screen and even start talking to the children.

"The characters will interact with children and explain to them the basics of Chinese opera, for example, the costumes, proverbs and allusions. This kind of knowledge is within each child's comprehension," Liu says.

The exhibition hall is illuminated with various visual representations of Chinese opera that give a modern rendering of the traditional art, for instance, animated productions of classic operas.

Wang Sheng, a student of animation, has created his own production of Farewell My Concubine, a well-known Chinese love story roughly based on historical records, through a 4-minute animated film. Legend has it that Liu Bang, a warlord at the end of the Qin Dynasty (221-206 BC) who became the first emperor of the Western Han Dynasty (206 BC-AD 24), defeated warlord Xiang Yu. Xiang's concubine Yu Ji didn't want to be a burden to him, and committed suicide. 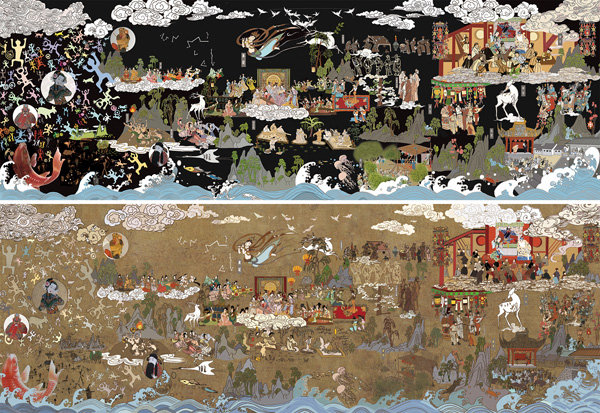 A modern rendering of traditional Chinese opera by Xian Shuting. [For China Daily]

Wang says that he first knew the story from the 1993 film version and, having studied at the National Academy of Chinese Theatre Arts, he has seen a lot of classic productions of this Chinese opera story.

"For my graduation design, I thought I could try to adapt this traditional Chinese opera through my own means, that is, animation," Wang says.

He focuses on depicting the love between the two. As the concubine dies, she is shown to go to a wonderland where grass is green and flowers are blooming.

"I used this imagined scene to show their love, before the story returns to reality, Yu Ji's death," Wang says. "It is my wish to present the ending in a romantic way, but I decided to respect the original plot."

Ma Chi, Wang's supervisor, approves his effort in using animation to promote traditional opera. Ma says: "His work is based on our classic opera, and is also quite aesthetically pleasing. Animation allows more teenagers to see our traditional culture and makes it more approachable to them."

According to the teacher, the combination of traditional opera and digital media is a positive trend for the art's future development.

"While Chinese opera itself, as a stage art, must be presented on stage, the audiovisual elements of the art form could be extracted and integrated into new media and technology."