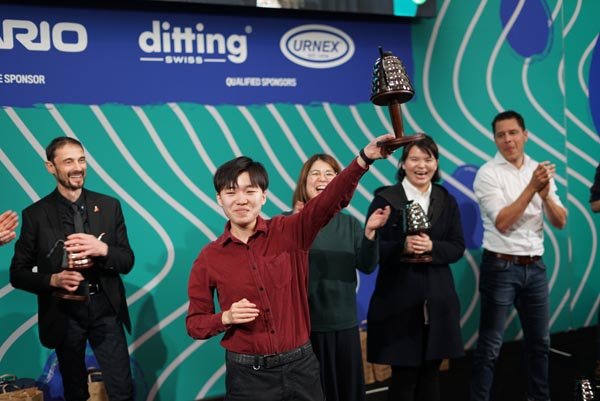 Du is the first Chinese winner of the World Brewers Cup Champion. [For China Daily/Dianne Wang]

As she poured, Du showed the weight of the dripper on an iPad screen next to her, which was a risky move if she made any mistakes, as the judges could monitor the exact time, temperature, and flow rate readings in real time for each brew.

Her steady hands ensured that the pouring perfectly matched her description.

According to her mentor Zhang Yinzhe, Du spent a year practicing pouring the water accurately using two hands so that she can manage to make four cups of coffee and drink them together with the three judges within the space of 10 minutes.

"Most competitors would use the 10 minutes just to make the coffee and describe the flavors, and the judges would have to drink them after that. But Du decided to curtail her preparation time so that the judges could drink along with her as she explained the flavors," says Zhang.

Du's recipe for the finals of the competition was 16 g of coffee, 240 g of water, to brew 190 g of beverage at a temperature of 94 C with a total extraction time of 1 minute 40 seconds.

"Now it's the most important part: Let's enjoy the coffee together," says Du, who recalls this as the key moment of her presentation — savoring the coffee.

She asked the judges to enjoy the aroma before pouring the coffee into the cup.

"Please swirl the vessel gently a few times. You will find yourself immersed in delicate, velvety floral aromas before being overwhelmed by apricot and cocoa notes, followed by the nice sweet taste of cream," Du says to the judges.

Unlike other competitors, Du simply introduced the coffee flavors using just a few words, the same way she briefly explained her brewing process.

Zhang explains that this simplified description allowed the judges more time to concentrate on the coffee.

"In the previous competition, Du would explain as much as she could, but we realized that it was actually a burden on the listeners, so we decided that less is more," says Zhang.

The judges drank the coffee with Du three times as the temperature cooled, to sample the different flavors released by coffee.

"What I love most about this coffee is the acidity! It is sweet like grapes, from a purple grape changing to a green grape, with medium intensity－it's vibrant and lively," says Du, explaining that the balance of the coffee, its complex flavors, delightful acidity and structured body in the mouth "was like a cello concert".

The final results were announced from the sixth runner up to the winner, so when the second place was revealed and Du's name still has not been called, her whole team started to cheer.

"I felt blank at that time. I couldn't breathe or even hear my team celebrating," Du recalls.

The 27-year-old Beijing barista started her coffee career nine years ago, and her competition route took off in 2015 after she was invited to work for Zhang's newly opened cafe in Nanjing.

"She is timid but eager to learn new things, and even though she is nervous before each competition, when once she is on the stage, she really shines," says Zhang.

Du won the third place at the China Barista Championship in 2015 and the following year became the national champion at the China's Brewers Cup, gaining the only spot that allowed her to compete on the world stage.

But she realized there was a gap between her and other top baristas in the World Brewers Cup in 2016 and decided to take a year off and be the assistant to her fellow teammates and allow them to compete.

In 2018, Du was back in the game. She made national champion again and was ranked eighth in the world. She was two places away from the final. One month later, she started to compete in the national competition again to earn her spot in Boston.

She stopped eating carbohydrates weeks before the competition to stay clear headed for her practice sessions, and also spat the coffee after tasting during evening practices so she could be well rested for the next day's training.

"I've practiced the whole presentation for the final 300 times, and I know exactly what move I'm going to make when I speak certain sentence," says Du.

Rather than focusing on winning the competition, Du says she focused on presenting her best skills as a barista.

"I knew I was in better condition than my previous competitions, because before I couldn't bear any changes to my brewing routine or my presentation, but this time I was still discussing things with my team and changing certain phrases the night before the final," says Du.

After winning the world champion title, Du was invited to join many coffee events around China. But after nearly five years' competition she feels she has completed a stage in her life. "The next step will definitely be related to coffee, but I need some time to figure out what it will be."