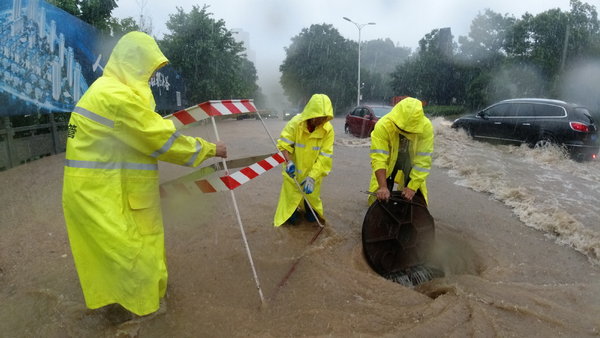 Workers unclog a drain in Yichang, Hubei Province, after the city was hit by a heavy rain on Saturday. [Liu Shusong /For China Daily]

Boasting a membership of more than 90 million and governing the world's most populous country, the Communist Party of China is celebrating its 99th birthday on Wednesday.

Over the past seven decades, the CPC has transformed China from a poverty-stricken and backward country into the second-largest economy globally.

The biggest political party in the world is also leading the country in eliminating absolute poverty nationwide and building China into a moderately prosperous society in all respects by the time the CPC marks its centenary next year.

According to observers, the secret of the Party's governance success is that it adopts a people-centered philosophy internally and continues to improve well-being. Externally, it upholds peaceful development and win-win cooperation and remains committed to advancing the building of a community with a shared future for mankind.

Liu Haitao, a professor at the National Academy of Governance specializing in scientific socialism, said the CPC has represented the fundamental interests of the Chinese people since it was founded in 1921, and has secured broad social support for its long-term governance.

The Party has continued such governance of the country through its close bonds with the public, Liu said. These connections enable it to implement its policies, decisions and development strategies to promote national progress and improve people's livelihoods.

Serving the people wholeheartedly is the fundamental purpose of the CPC, as laid down in the Party Constitution and upheld by generations of its leadership. Breakfast is distributed on Monday to flood-hit villagers in Mianning county, Sichuan Province. The Communist Party of China has always made serving the people its priority. [Li Jieyi/Xinhua]

Xi Jinping, general secretary of the CPC Central Committee, has made "people" a keyword in his work since becoming the top Party chief in 2012. On a number of occasions he has said, "The people's desire for a better life is the goal we strive to realize."

When the coronavirus outbreak hit the country this year, Xi acted as commander-in-chief in the war against the contagion, urging officials to put people first and give top priority to the public's health and lives.

Under the strong leadership of the CPC Central Committee with Xi at its core, China has put in place an efficient system to coordinate pandemic control and socio-economic development.

A white paper on China's fight against COVID-19, released by the State Council Information Office on June 7, said this highly efficient system has made it possible for China to win its "all-out people's war against the virus".

On May 24, Xi said the fundamental goal for the Party to unite and lead the people in revolution, development and reform is to ensure they have a better life, adding that the CPC will never waver in pursuing such a goal.

He made the comments at the annual session of the National People's Congress, the nation's top legislature, during deliberations with deputies from Inner Mongolia autonomous region.

Faced with the spread of COVID-19, the Party, from the start, stated clearly that top priority should be given to people's lives and health.

"What is 'people first?'" Xi asked in discussions with the deputies, before answering the question.

"So many people worked together to save a single patient. This, in essence, embodies doing whatever it takes (to save lives)," he said, adding, "We are willing to protect people's lives and health at all costs."

Xi was referring to a story told by Luo Jie, a doctor from Hubei province, which has been severely affected by COVID-19.

Luo told reporters how medical workers at his hospital spent 47 days saving an 87-year-old infected with the disease. About 10 of them took care of the patient.

During the pandemic, the most sophisticated medical resources have been used worldwide to treat elderly patients, the group most at risk from COVID-19. In China, however, all patients have received equal treatment, irrespective of their age or financial status.

In Hubei alone, more than 3,600 patients age 80 or older have recovered from the disease. In the provincial capital Wuhan, seven centenarians have been cured.

Xi has said on various occasions that the strong leadership of the CPC Central Committee, the advantages of socialism with Chinese characteristics and the country's strong mobilization capabilities would see China win the fight against the pandemic and maintain momentum for socio-economic development.

Robert Lawrence Kuhn, a public intellectual and international corporate strategist, said he took it seriously when the Standing Committee of the Political Bureau of the CPC Central Committee, China's highest authority, described the pandemic as "a major test of China's system and capacity for governance".

In an opinion piece published on the China Global Television Network website, Kuhn said he could not recall an event of similar significance in the 30-plus years he has been observing China.

He said the "whole-of-government, whole-of-society" approach adopted by the CPC in responding to the unprecedented public health crisis operates efficiently, because it relates to how the Party system works.

Kuhn said such commitment and mobilization have been used by the Party to win the battle against poverty since around 2012. These efforts have involved lifting 100 million people out of absolute poverty and coordinating Party leadership and organizations at central government and five levels of local government－provincial, municipal, county, township and village.

He added that there are striking structural similarities between China's war on the coronavirus and its fight against poverty.

The CPC has made it clear to the world that it is a political party that not only strives to seek happiness for the Chinese people, but also aims to advance humanity.

Speaking at the CPC in Dialogue with World Political Parties High-Level Meeting, held in Beijing in 2017, Xi said the Party has been striving to improve Chinese people's well-being, pursue national rejuvenation and seek peace and development for mankind.

As a result, when COVID-19 spread globally, the Party called on the international community to respond to the contagion, advance cooperation in the fight against the pandemic, and build a global community of health for all.

According to the Foreign Ministry, more than 170 overseas leaders, 50-plus heads of international and regional organizations, and more than 300 political parties or organizations have expressed sympathy over the outbreak and voiced their support for China's efforts to curb the virus.

The country has provided medical supplies and expertise to other nations while sharing information and anti-epidemic experiences with them. By the end of May, China had exported equipment, including face masks and protective clothing, to more than 200 countries and regions, the ministry said.

In April, the CPC and more than 230 political parties from 100-plus countries issued an open letter concerning international cooperation in the fight against COVID-19. The letter urged all countries to put people's lives and health above everything else and to take resolute and forceful measures to contain the virus.

To promote international teamwork, Xi announced at the opening of the 73rd World Health Assembly in May that China would provide $2 billion over two years to help with the response to COVID-19 and with economic and social development in countries affected by the pandemic.

He said COVID-19 vaccine development in China would, when available, be made a global public good.

During intensive interactions with foreign leaders through videoconferences, phone calls and correspondence in recent months, Xi stressed that China upholds the vision of a community with a shared future for mankind in the fight against COVID-19. He called on countries to work together to prevail against the disease, reduce fallout from the pandemic, and contribute to the stability of global industrial and supply chains and the recovery of the world economy.

Moroccan Prime Minister Saad Eddine El-Othmani, who is also general secretary of the Islamist Justice and Development Party, said that faced with the challenges of COVID-19, political parties in Arab states want to develop exchanges and cooperation with the CPC relating to anti-epidemic experiences.

Faced with a complicated international landscape, China is striving to tackle the substantial threats posed by unilateralism, protectionism, and especially the global economic recession resulting from COVID-19. The CPC has a number of responsibilities, including forestalling and defusing major risks, preventing and treating pollution, and poverty alleviation.

The CPC is committed to building itself into a vibrant Marxist governing party that keeps abreast of the times, enjoys the people's wholehearted support and has the courage to reform and be able to withstand all challenges.

Noting some negative factors, dangers and challenges ahead, Xi has said the Party's self-reform faces arduous and long-term tasks, and no thoughts of pausing or resting should be entertained.

Problems and obstacles that could shake the Party's foundations must be eradicated through self-reform, and members should listen to the people and voluntarily accept public oversight, he said at a group study session of the Political Bureau of the CPC Central Committee in June last year.

Khun, the corporate strategist, said China's readiness to change and improve is a critical part of its governance system.

"When I discuss the primary reasons for China's remarkable development over the past four decades, I always include the Party's willingness, albeit out of necessity, to admit and correct errors," he said.

In October, the fourth plenary session of the 19th CPC Central Committee adopted a landmark decision, urging the Party to uphold and improve the system of socialism with Chinese characteristics and advance the modernization of China's system and capacity for governance.

Salah Adly, general secretary of the Egyptian Communist Party, said the CPC has made a breakthrough in promoting China's industrialization and opening up to the world, while managing to overcome all difficulties and challenges in making progress and development. 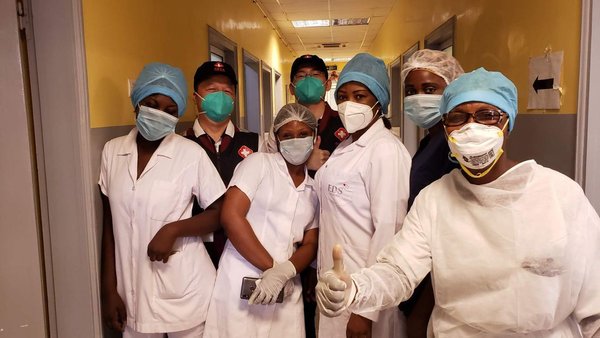 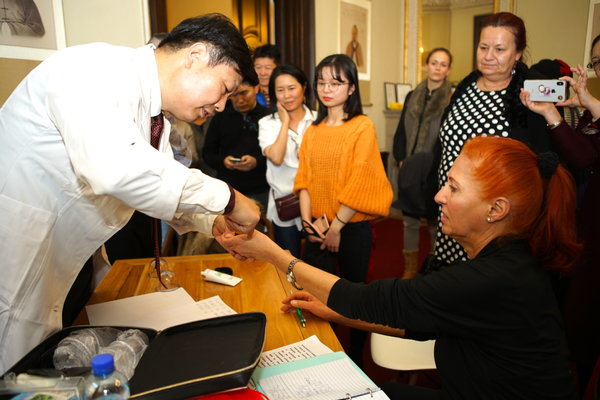 A Chinese doctor gives acupuncture treatment in Prague, Czech Republic, during a visit in November to promote traditional Chinese medicine through the Belt and Road Initiative. [Xinhua] A bird's-eye view of the Port of Piraeus in Greece, which has been helped to develop by the Belt and Road Initiative. [Hu Lu/Xinhua]