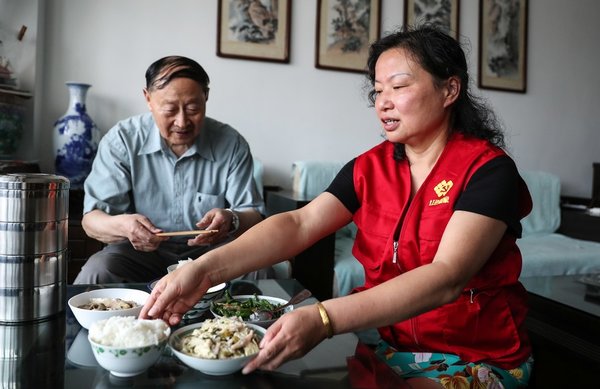 NANJING, July 6 (Xinhua) — Despite the drizzle, 84-year-old Wu Siqin decided to go and see the kitchen that prepares meals for elders like him in his community.

In the kitchen, where everything was neat, clear and bright, members of staff were busy packing dishes into lunch boxes. The food was fresh from the wok: chicken, curry soup, cowpeas and bean-curd sheets with fried meat.

"The kitchen has helped solve one of the biggest problems we elders have," said Wu. "At such an old age, cooking is no easy job, so I used to deal with my meals in the simplest way. Now, the kitchen prepares food for me, and the deliverymen and community workers bring it to my door, which makes my life much easier."

Wu lives in the Loufeng Community in Suzhou City, east China's Jiangsu Province. Nearly a quarter of the residents in the community are elders.

Faced with such a big percentage of elderly residents, the community started to develop a community-based elderly care system in September last year, which involves services in food, emergency response, medical care, cleaning and psychological care. 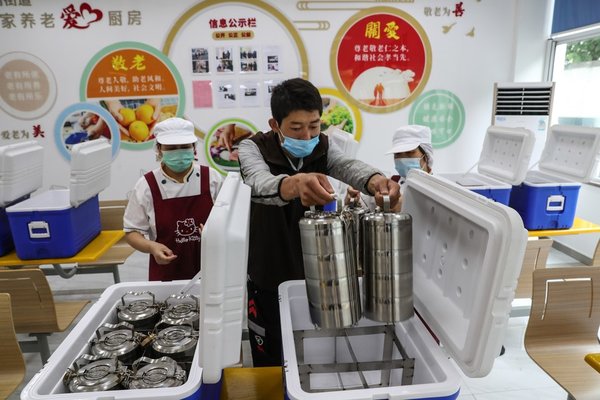 With an initial investment of 360,000 yuan (about 51,120 U.S. dollars) from the local government and over 200,000 yuan donated by 10 local companies and organizations, the kitchen was built and a trial run started in December last year.

Due to the novel coronavirus outbreak, the trial run was suspended in January this year. But the community soon resumed the trial run after the epidemic eased. On May 22, the kitchen was officially put into operation.

"The chef is great and the dishes are different every day," Wu said. "And I only have to pay nine yuan. You can't get such good food elsewhere at such a low price. The dishes are enough for both my lunch and dinner."

So far, about 60 elderly residents in the community have enjoyed the food service from the kitchen.

"We make the dishes according to the elders' needs. For example, we use bean products and vegetables more often because they are easier for the elders to chew and digest," said Zhao Tai, who is in charge of running the kitchen.

"I thought it was a good deed to deliver food for the elders, so I took part," said Zhang Liangliang, one of the deliverymen. "After all, everybody has an elder at home, and by doing this, I feel like I'm taking care of the elders in my family too."