'Little Mermaid' to Make a Splash at Kids Theater Fest 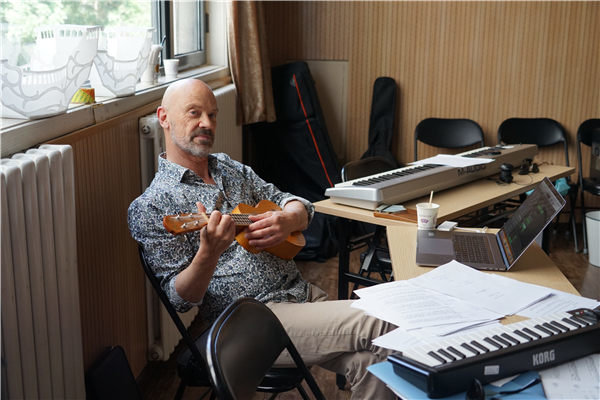 It all starts with a bucket of water.

When Danish theater director Torkild Lindebjerg was invited by the China National Theatre for Children to create a play based on the classic fairy tale, The Little Mermaid, written by the Danish author Hans Christian Andersen, that was the first idea that came to his mind.

"I can still recall going to the seaside as a child with a small bucket, putting on my flippers and goggles. I liked stepping into the water and making noisy sounds with my flippers," says the Lindebjerg after a rehearsal for the play, which will premiere at the theater on July 6. After the opening performance, the play will be staged on the last three weekends of August and on Sept 1.

As a director and actor working in theater for more than 40 years, Lindebjerg still found a challenge in turning The Little Mermaid into a play for children, since the original fairy tale is quite a sad story.

"Hans Christian Andersen's language is poetic and beautiful and I always want to get something out of a play I work on. In the end, the little mermaid sacrifices herself for the man she loves and she gets an eternal soul. That's the ultimate hope in the story," says the director. "The most important thing about theater is that it's a place for children and adults to get together and enjoy an exciting adventure."

In March, Lindebjerg came to Beijing to do auditions and five young actresses from the China National Theatre for Children were selected to play the roles of the five mermaid sisters.

"This is the first time that I have directed a play performed by Chinese actresses, which is interesting and challenging to me," the director says.

Lindebjerg has invited his longtime friend, Danish composer Jens Tolsgaard, to write music for the play and another Dane, artist Niels Secher, to be the production's visual designer.

Most of the music pieces Tolsgaard has composed for the show are performed using stringed instruments, like guitar, harp and ukulele.

"I have tried to create two worlds, one above and one under the water, like replicating the sounds of the ocean, the bubbles, the chatting of the little mermaids," says the composer, adding that he started working with the director in 1993.

The Little Mermaid is one of the plays which will be staged during the upcoming 9th China Children's Theatre Festival. 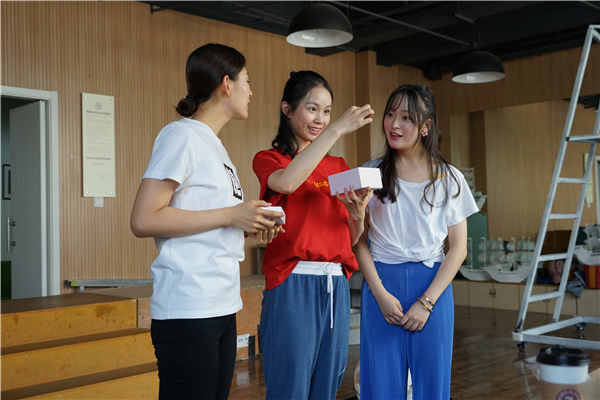 Actresses from the China National Theatre for Children rehearse the play in Beijing. [For China Daily]

From July 6 to Aug 11, a total of 57 theatrical productions from 14 countries, including the United States, Denmark, Japan and Russia, will be staged with 191 performances at the China National Theatre for Children.

Some of the plays will be staged in other Chinese cities, in Hebei and Shandong provinces, as well as in Tianjin.

"China Children's Theatre Festival is an annual festival held during the summer vacation. We want to introduce theater to a younger audience, which, we believe, can change their lives," says Yin Xiaodong, head of the China National Theatre for Children.

Marking the 70th anniversary of the founding of the People's Republic of China, a new original play titled Stars in the Flame will premiere as the opening play for the festival. It tells the story of children who lost their parents during the War of Resistance Against Japanese Aggression (1931-45).

Yin adds that since 2014, the China National Theatre for Children has launched some other programs for the festival besides live performances, such as workshops and forums, which see artists from around the world share their views about plays for children.

Co-producing plays is a great way for artists to communicate, learn and experiment, Yin says.

Yin initiated the idea of co-producing The Little Mermaid with Henrik Kohler, CEO of Teatercentrum-a theater center in Denmark for children and adolescents and organizer of the Aprilfestival, a theater festival for young audiences. It was Kohler who introduced Yin to Lindebjerg and that's where the project started.

Last year, the annual artistic gathering of the International Association of Theatre for Children and Young People came to China for the first time. The Children's Theatre of Charlotte in the US performed an adaptation of China Idiom Stories, one of the most popular productions staged during last year's China Children's Theatre Festival.

"The exchange programs opened our minds about making plays for children and those programs prove the idea that theater can change children's lives," Yin says.

Child actors from the Malanhua Art School in Singapore will close the festival with the play, Malanhua, which premiered in 1956 and has been a classic play in the China National Theatre for Children's repertoire.