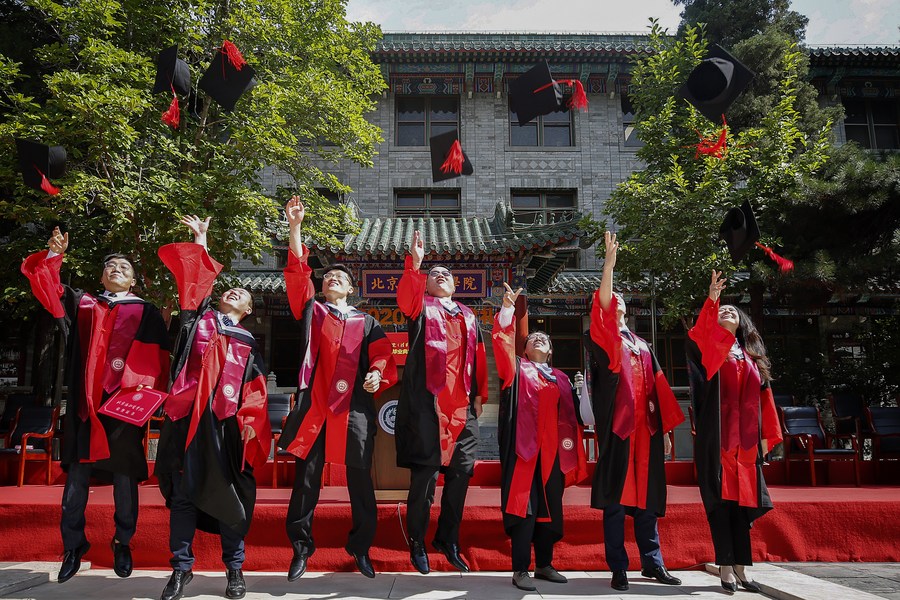 Graduates celebrate their graduation after the commencement ceremony of the Peking Union Medical College (PUMC) in Beijing, capital of China, June 30, 2020. [Xinhua/Zhang Yuwei]

BEIJING, July 8 (Xinhua) — Chinese President Xi Jinping has encouraged college graduates throughout the country to make more contributions for the Party, the country and the people.

Xi, also general secretary of the Communist Party of China Central Committee and chairman of the Central Military Commission, made the remarks in a reply letter Tuesday to 118 graduates studying at China University of Petroleum-Beijing at Karamay, northwest China's Xinjiang Uygur Autonomous Region.

In his letter, Xi expressed support for the choice of the 118 graduates from the university after learning that they would take grassroots jobs in Xinjiang and aspire to work with people from different ethnic groups for the development of the country's western region.

He pointed out that college graduates this year have learned a lot from the arduous fight against the COVID-19 epidemic.

"There will be ups and downs along the road ahead, and the great rejuvenation of the Chinese nation can only be achieved through the hard work of generations of youth," Xi said.

Xi encouraged college graduates to aim high, be down-to-earth, brave difficulties and obstacles, shoulder the mission of the times, integrate their pursuit of ideals into the cause of the Party and the country, and make more contributions.

He asked Party committees and governments at all levels and all sectors of the society to make every effort to help college graduates find jobs, and take effective measures to overcome the impact of COVID-19.

Xi has always paid close attention to the employment of college graduates and issued important instructions about it on different occasions.

Located in Xinjiang, the university's Karamay campus began enrollment in 2016. About 85 percent of its first 435 graduates hailing from 16 provincial-level regions across the country have secured jobs this year, and 118 of them chose primary-level positions in Xinjiang.