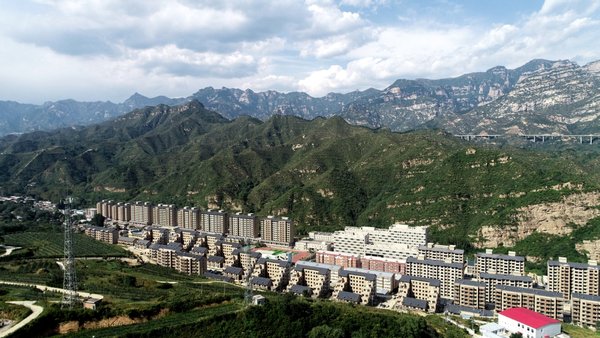 A view of a new residential community in Fuping County, Hebei Province. The community, built by the local government, was designed to house rural residents who were relocated because their houses were either too old or too shabby to live in. [Photo provided to chinadaily.com.cn]

People in a formerly destitute county have been given new hope.

Without the outbreak of COVID-19, Liao Yulan would have invited her parents, who live in the Guangxi Zhuang Autonomous Region, to visit her new home in Fuping County, Hebei Province.

It would have been the first time they had visited her in 15 years.

The two places are about 2,000 kilometers apart, but distance has never been the problem.

"I didn't want my parents to see my old house because they would have pitied me and worried about my life here," said the 39-year-old, who until recently stayed home with her two sons while her husband worked in a city to support the family.

"People won't believe me, but it's true－I never let my parents visit me after I got married in 2005," she said, giving an embarrassed laugh.

She married into her husband's family in Huang'an Village, Fuping, after a three-year relationship.

The two met in Guangdong Province, where they were both migrant workers.

For many years, they lived in an old run-down house, just like most of the rural homes in poverty-stricken Fuping.

With mountains accounting for 87 percent of the land, Fuping had been on the list of national-level poverty-stricken counties since 1986, when the government first established bodies to tackle the issue.

The scarcity of fertile land and a poor transportation network constrained Fuping's economic development because employers were reluctant to open businesses there.

This led to limited work opportunities and left residents no way to improve their living standards. Most young people went outside of the county to find jobs and support their families back home.

"I remember the walls of our old house were made of stone, and my son needed to trudge uphill to school in another village," Liao said, adding that when her older brother visited, he was disappointed with her situation.

"At first, I didn't know my husband's hometown was such a poor place, either," she said, smiling ironically.

Liao can laugh as she recalls the past because things have changed.

Last year, her family moved into a 100-square-meter apartment in a new residential community. With three bedrooms, a living room, two bathrooms and a kitchen, Liao's new home is no different to apartments in big cities, except the decor reflects local tastes with little in the way of interior design or fancy furnishings.

"For us, it's like a dream come true. The new home is warm, clean and convenient, and much better than the old one," she said.

The community was built by the local government to resettle rural residents whose houses were too old or shabby to be lived in.

The project, one of several introduced by the county to improve living standards, started in 2016.

Since then, 41 communities have been built to provide new homes for 17,714 households, including 10,313 classified as living in poverty. New schools and clinics have also been built to make life more convenient.

"Now it only takes about five minutes for my sons to walk to school," Liao said.

Ma Shiping, a local official, said: "Giving people new homes is a direct way to improve living standards, but it's not a complete way to get them out of poverty. We must ensure they can stand on their own feet."

To create stable employment opportunities, the county has rolled out preferential policies to attract labor-intensive businesses.

Since 2013, 34 handicraft workshops, 70 livestock breeding bases, 76 edible fungus planting centers and 27 orchards have been established near the resettlement areas to ensure that at least one person in each family has a stable job near their home.

Liao is employed at a handbag workshop near her house, where she uses a sewing machine to stitch bags.

In 2014, the family was officially designated as impoverished. A lack of skills was the cause of their hardship, according to a report produced by the county's poverty alleviation bureau. The document details the family's situation and notes the support and aid provided by various government bodies.

To help overcome the problems, the local government provided opportunities for Liao and her husband to learn skills, such as how to operate agricultural equipment and undertake skilled work at construction sites and factories. According to the report, Liao's family was taken off the list of poverty-stricken families in 2015.

"With the skills we learned, we won't fall back into poverty again," she said.

Every needy household in Fuping has its own file, complied by the local government, that details the causes of its poverty and the support provided. Specific aid plans are devised based on each family's situation.

Once a resident's income rises above the poverty line and his or her condition meets national assessment standards, the person is classified as "out of poverty". However, the support continues to ensure that no one slips back into poverty.

Located about 250 km southwest of Beijing, Fuping lies deep in the Taihang Mountains, which span Beijing, the provinces of Hebei and Shanxi and run down to the central province of Henan.

President Xi Jinping visited Fuping in December 2012, shortly after being elected general secretary of the Central Committee of the Communist Party of China.

In 2013, the central government introduced an ambitious plan to eradicate poverty nationwide by the end of this year.

In Luotuowan, a remote village in Fuping, locals have experienced tremendous changes since Xi's visit.

Their per capita disposable income rose from 950 yuan in 2012 to 13,620 yuan last year, while the poverty headcount ratio fell from 79.4 percent to zero.

The improvements were due to a number of poverty alleviation and development plans, including selecting capable officials to guide relief work and introducing suitable industries like tourism and the cultivation of grapes and fungi.

Gu Ruili, Party chief of Luotuowan, was elected to the post three years ago because of his business experience.

"Without development ideas, the village cannot walk out of poverty by itself," said Gu, who started in business in his 20s, running successful guest houses and ecotourism spots.

The 48-year-old said Luotuowan is suitable for the development of tourism because the weather is cool in summer, the air quality is better than in cities and it has beautiful mountain scenery.

In recent years, the dilapidated old houses in the village have been renovated into new residences, while retaining their traditional features, and roads and other infrastructure have been upgraded.

Last summer, the village received more than 200,000 visitors — mainly from Beijing, Tianjin, and cities in Hebei and neighboring Shanxi — who came to escape the city heat and their busy urban lives, Gu said.

The local tourism industry is run by a company that rents villagers' houses and transforms them into country inns.

The villagers, who mainly live in the new residential communities, receive the rental money and a share of the profits at the end of each year. 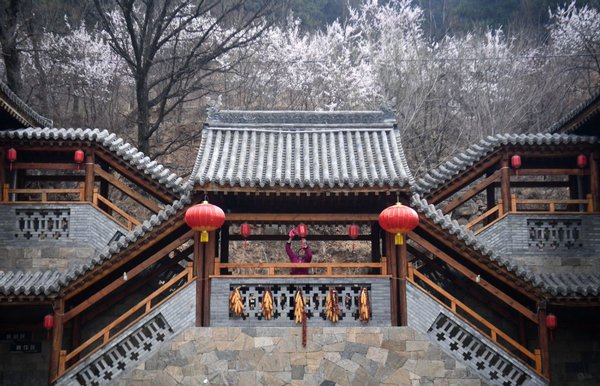 The 72-year-old works for the company cooking local food for tourists. She earns about 2,000 yuan a month.

She lives in a new two-story house and rents her old home to the company for 50,000 yuan a year. She has also rented her land to another business that grows fruit.

"I never imagined I could live a life like this," she said, recalling how her family used to rely on planting potatoes and corn on scraps of land in the mountains.

"Now, I never need to climb the hills and plough land."

Luotuowan is not the only village that has lifted its residents out of poverty by making use of natural resources.

Some have encouraged companies to develop unused mountainous areas to grow apples and pears. With unpolluted water and clement weather, yields are high and the fruits are extremely popular.

Last year, the number of registered impoverished people in Fuping fell to 832, accounting for just 0.45 percent of the population.

In February, Fuping was removed from the list of poverty-stricken counties.

"We will make even greater efforts to consolidate the poverty alleviation success and establish a guarantee system to prevent poverty from returning," said Jia Ruisheng, the county's head.