BEIJING, July 12 (Xinhua) — Chinese President Xi Jinping has called for the greatest efforts to brave challenges and go to the frontline of flood prevention and rescue and relief work to ensure the safety of people's lives and property.

Xi, also general secretary of the Communist Party of China Central Committee and chairman of the Central Military Commission, made the remarks in an instruction on flood prevention and rescue work.

Noting the waters in rivers such as the Yangtze River, Huaihe River, as well as lakes such as the Dongting Lake, Poyang Lake and Taihu Lake have exceeded warning levels and regions including Chongqing, Jiangxi, Anhui, Hubei, Hunan, Jiangsu and Zhejiang have seen severe floods recently, causing casualties and property losses, Xi said the flood prevention situation is grim.

China has entered a crucial period of flood control, Xi said, calling for Party committees and governments at all levels to take responsibilities and go into the frontline to guide flood control work. 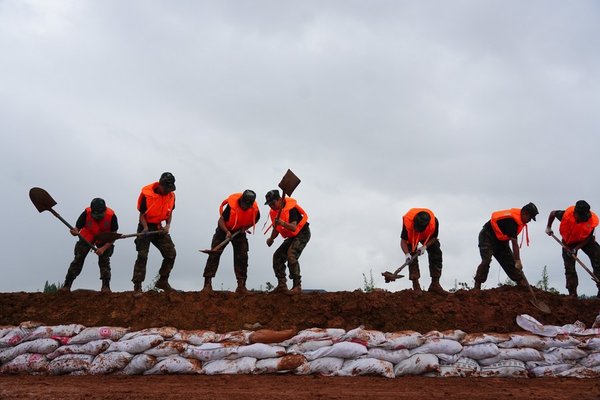 The PLA and armed police troops stationed in flood-hit regions should actively participate in the rescue and relief work, he said.

While making effective flood control and disaster relief efforts, local authorities should at the same time carefully plan the reconstruction to restore production and help people return to their normal life as soon as possible, Xi said.

Serious efforts must be made to assist the flood-affected poor residents so that they will not fall back into poverty because of the disasters.