The Master of Chinese Art in a Glass 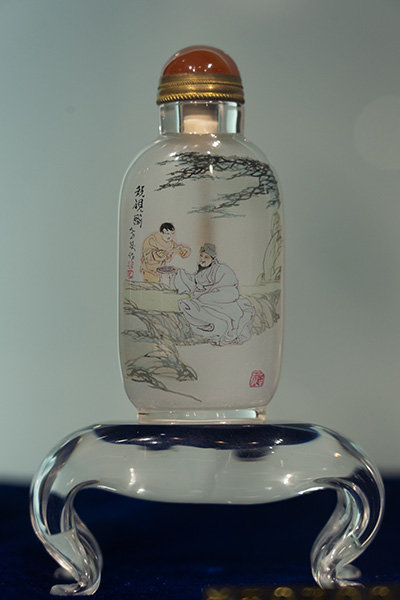 One of Wang's works that was on show in Shanghai from April 22 to Tuesday. [For China Daily/Gao Erqiang]

Glass art has taken on a unique look in Boshan, a small town in East China's Shandong Province, where artists are creating complex paintings inside small snuff bottles that are no larger than a person's palm.

Some of the master artists from Boshan presented their creations in Shanghai from April 22 to Tuesday in an exhibition titled Spilt Colors and Flowing Lights at the new cultural center at 52 Duolun Road that features traditional Chinese art and craft.

Although artists in China began painting inside snuff bottles in the early 1800s by dipping the curved tips of fine bamboo sticks in ink and mineral pigments, it was Wang Xiaocheng who redesigned the Chinese brush and took the art form to a new level.

The 74-year-old, who is one of the artists featured at the exhibition in Shanghai, is also one of six nationally recognized master craftsmen who have made significant contributions to the center. Wang will also have residence, host cultural salons and give lectures at 52 Duolun Road.

Wang is known as the man who combined Chinese paintbrushes with the miniature bamboo stick that allowed him to create thinner and more accurate strokes on the glass surface, in turn paving the way for the creation of more complex artworks.

Among his best-known creations is a group portrait of 108 characters from the classic Chinese novel The Water Margin. All the heroes and martial art fighters are painted on two sides of a glass bottle measuring no more than 8 centimeters tall and 5 centimeters wide.

Wang says he joined the glass factory when he was just 12 years old, filling the job that his sister vacated as she was sick. His talent for the craft was clear even though he was so young. Just a year later, Wang was chosen to be an apprentice of master craftsman Xue Jingwan and he got to learn how to paint on the interior of bottles. He later studied at an art school in Shandong and at the Zhejiang Academy of Fine Arts, now known as the China Academy of Art.

Eager to put into use what he had learned, Wang had in 1961 bound part of the hair from a painting brush with fine thread to the bamboo stick traditionally used for painting on the interior of bottles. The soft tip allowed a new freedom for expression.