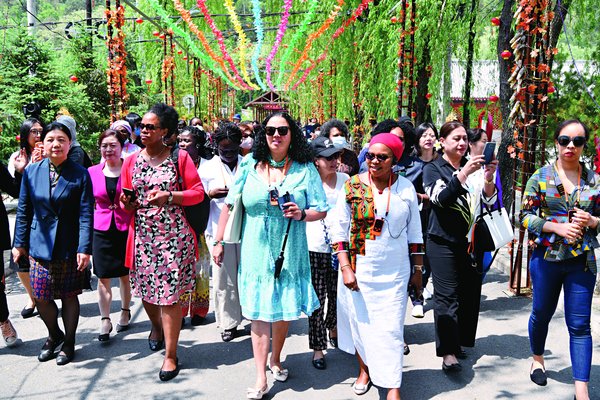 A 30-member delegation visited Yan'an, in Northwest China's Shaanxi Province from May 10-13, 2021, at the invitation of the All-China Women's Federation (ACWF). Members of the delegation included women ambassadors, spouses of ambassadors and other women diplomats from more than 20 countries. They visited the historical site of the women's committee of the CPC (Communist Party of China) Central Committee in Yangjialing, the village history museum of Liangjiahe and primary-level women's development-project sites. Prior to the visit, the delegation attended the Silk Road on Fingertips — Silk Road Women's Forum in Xi'an. The visit symbolized the launch of "China in the Eyes of Women Diplomats," an activity being held by the ACWF throughout the year.

Some delegates expressed gratitude for the warm invitation from and the diligent organization by the ACWF. Following are part of their thoughts on the visit:

'A Leader Who Always Thinks about His Country and People, and Who Bears Responsibilities on the World Stage'

Winnie Chibesakunda, Ambassador of Zambia to China, said the visit deepened her understanding about why China has chosen to walk the path of socialism with Chinese characteristics. "President Xi Jinping worked for many years at the primary level. He knows the importance of making and perfecting policies that truly answer the people's needs and he works to give the people a better life. Many countries in Africa continue with political systems dating from the colonial period, and those countries have not found a path fitting their development. Africa needs to learn from China. Xi is a president who promises and keeps to his promises. He proposed during the 2018 Beijing Summit of the Forum on China-Africa Cooperation a series of cooperative projects to help African countries develop. President Xi has played his part in leading and promoting China-Africa communications and cooperation, fulfilling the promises China has made to Africa," Chibesakunda says. Tania Romualdo, Ambassador of Cabo Verde to China, said she was impressed by her visit to Liangjiahe, a village where President Xi used to work. "I can tell President Xi is a leader who always thinks about his country and people, and who bears responsibilities on the world stage. He still thinks about the places where he has worked before, like Liangjiahe and Ningde. He cares about the development of those places and the people there, with whom he has kept a close connection. This is the reason why China has shaken off poverty and achieved great progress. During the 13 years when the CPC Central Committee was based in Yan'an, the Party made many significant decisions that would lead to a huge change in China. The CPC has achieved the revolutionary victory under such hard circumstances and has led Chinese people in reaching the great achievements of today. This is amazing!" Romualdo says.

Christiane Adovelande, President of the Group of African Ambassadors Spouses (GAAS) and spouse of Ambassador of Benin to China, says President Xi impresses her as a person with great love. "Xi works to benefit more people. When he was in Liangjiahe in his youth, Xi had already begun holding firm to the belief he had to serve his country and people. I was deeply moved by his concept of the Chinese Dream meaning the dream of Chinese people," Adovelande says. 'The CPC Has Reached Success Because the Party Has Persisted on a Clear Goal Since Its Founding: To Strive for Happiness of the People'

Isabel Domingos, Ambassador of Sao Tome and Principe to China, says the visit to Yan'an gave her a deeper and more comprehensive impression of the history of China and the CPC. "The CPC has gone through a lot of hardships, leading people of all ethnic groups to achieve the victory of the revolution in China and to reach all-round economic and social development. The CPC has reached success because the Party has persisted on a clear goal since its founding: To strive for happiness of the people. The Party has been able to unite its people closely together and to reach victory during one (battle) after another, regardless of the various difficulties they have encountered when they were marching ahead."

Adovelande has visited many places in China. During each visit, she says she has witnessed the CPC and Chinese Government's efforts to improve people's livelihoods and to advance social progress. "President Xi, the CPC and the Chinese Government have done a lot to help people shake off poverty. Xi has stressed the idea of 'no one should be left behind' in poverty alleviation. The recent visit to Liangjiahe reminded me of China's vigor shown in poverty alleviation, the building of a well-off society and opening a new chapter in the country's development history. I want to send my best wishes to the Chinese people," Adovelande says. 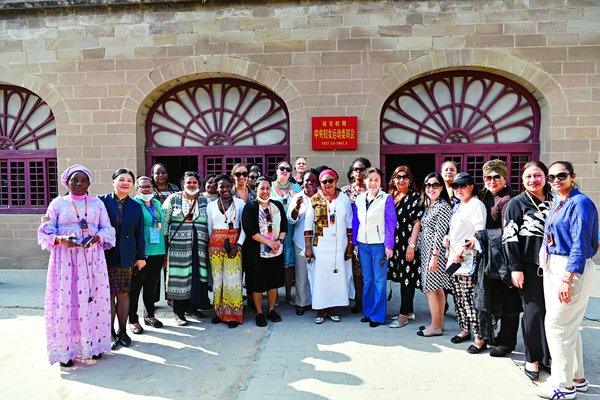 Romualdo recalled her visit to Ningde, during which she saw the great achievements China made in poverty reduction and the important roles women have played in the elimination of poverty and hunger, as well as in education and health-care development. Each visit has left her with remarkable experiences.

Domingos talked about the significant role of Chinese women during the revolutionary period in Yan'an. "Women not only fought at the front, they also made clothes and shoes and provided supplies to soldiers. This showed Chinese women's firm belief, passion and determination to achieve the revolutionary victory. Since the success of the revolution and the founding of the People's Republic of China, Chinese women have continued to make important contributions to building a democratic and prosperous country with blooming economic and social progress. The irreplaceable role Chinese women play in all fields is worth learning by women from other countries," Domingos says.

Chibesakunda says, "The Belt and Road Initiative (BRI) is a very inclusive drive. The initiative not only benefits countries that were along the geographic route of the ancient Silk Road, it has also been opened for all countries to participate. There are a lot of things Zambia has already benefited from the BRI. China offers scholarships to Zambian students and many of the youth in our country are working in most of our industries, and they are grasping various approaches in what they are doing. We are grateful to China and we hope to cooperate with China in more fields in the future. The issues discussed during the Silk Road Women's Forum are affecting women worldwide. Such a forum should come up with solutions, which should be shared internationally, so the women and governments of Zambia and other countries can learn practical knowledge, deepen cooperation and push the world to develop better."

Romualdo mentioned the outstanding efforts China made in epidemic prevention and containment in 2020, as well as the country's achievements in promoting economic recovery, which impressed the world. "China provided an example for other countries to learn from and the country played its role in advancing global inclusiveness. I sincerely expect the Silk Road Women's Forum will act like a bridge and the BRI will connect Chinese women closely with women all around the world," says Romualdo.

Maria Gustava, Ambassador of Mozambique to China, recalled the 25th anniversary (in 2020) of the United Nations Fourth World Conference on Women. "Due to the impact caused by the novel coronavirus disease (COVID-19) pandemic, women in many countries and regions encountered difficulties in their development; women's development in certain fields even fell back. Women and children became the majority of the COVID-19 pandemic's victims in poverty-stricken areas in Africa. The BRI, however, provided a good platform for various countries to combat the pandemic together, recover economic development, deepen cooperation and achieve win-win relations. The Silk Road Women's Forum provided a good opportunity for various countries to advance gender equality and women's development and to ensure none of them get left behind in the digital era, regardless whether the country is rich or poor. I expect to see the partnership between Mozambique and China and among various countries develop, and a new chapter is written in the field of women's communication and cooperation."

Domingos noted women medical workers made up 70 percent of those who fought on the front line during China's fight against COVID-19. "Chinese women play a unique and important role in their families as well. Actually, I can say that women play a role of more than 'holding up half the sky.' I hope the Silk Road Women's Forum will have a greater influence on various countries, helping them share good practices and learn from each other, so women will make greater contributions to the building of the Belt and Road. Meanwhile, women will achieve self-development and advance gender equality worldwide," says Domingos. 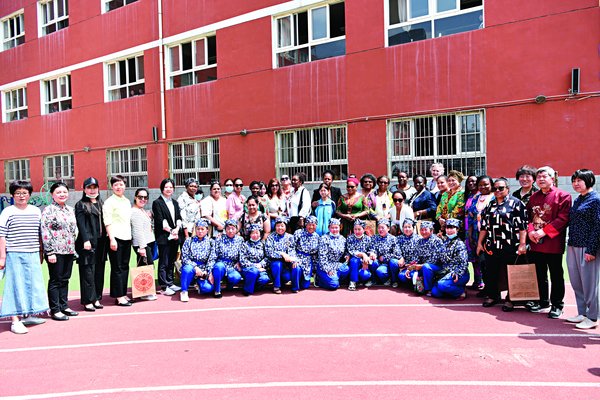