A neighbor who was unable to hear or speak became the inspiration for a teenage Liu Lingli in Hengyang, Hunan Province, to study special education.

"The woman was very kind to the kids in the neighborhood. But we did not know what her sign language meant," said Liu, who now teaches at a school designated for children with disabilities in Hengyang.

"She was illiterate and could not find a job. Even worse, her husband was not kind to her," Liu recalled, saying that the neighbor's situation led her to have compassion for people with disabilities.

Liu eventually enrolled in a college focusing on special education in Nanjing, Jiangsu Province. She learned how to teach people who cannot hear, speak or see or who have learning disabilities.

After graduating in 1991, she was recruited by a special education school in Hengyang. The school's 300 students all have disabilities.

Liu takes care of those who cannot hear and speak.

"Once people with disabilities are literate, they are more likely to find a job and live a different life," Liu said.

"The teachers put a lot of effort into their job, as the children who can't hear have no knowledge of sign language or how to learn," she added.

It is especially difficult for those who teach first-graders. "We are teachers as well as 'nannies'," Liu said.

The school offers three-year preschool training and classes for grades one to 12.

"Our students stay here longer than those in ordinary schools," said Liu.

Liu teaches the children how to use sign language, pronounce and write. "We also tell them how to create a study routine," she said.

Special education teachers are, to some extent, therapists. "Teachers taking care of the language training class are responsible for helping students have aural-speech rehabilitation," Liu said. "And teachers in charge of the children with cognitive disabilities help them know how to control their movements and mood."

In her classes, Liu demonstrates tongue movements to help her students train their vocal abilities. "For those students who are unable to hear and speak, their issue is how to use their vocal organs," she said.

Liu has written a textbook on training the tongue to improve speaking ability.

She also offers "a situational teaching method tailored for our students who don't know how to do things in everyday life".

A mock grocery store, for example, is set up in the class and students are encouraged to "buy" what they want from Liu, who plays a saleswoman.

The students are divided into several groups, in which they are supposed to help each other.

"In doing so, we cultivate their sense of coordination and team spirit," Liu said.

Students from special education schools are given special consideration when they take college entrance examinations, and some have enrolled in institutions of higher learning.

"When well-educated, the students are able to work and live a normal life," Liu said. "Knowledge helps change the fate of individuals."

At a reunion party for teachers and students last year, Liu saw one former student who is now an optimistic mother of three.

"I feel so happy for her and other students," she said. "The ultimate goal of special education, or education in general, is to help children earn a living and live a normal, happy life."

The smiles on her students' faces are the source of happiness for Liu.

Even when she had serious issues at home, her concern for her students didn't fade.

In 2005, when Liu was 32, she gave birth to a boy who, at the age of 7 months, was diagnosed with congenital deafness. She said her husband then divorced her because of their son's disability.

Liu tried hard to achieve a work-life balance. She continued to teach her class and also trained her son, who, by wearing an artificial cochlear device, could speak when he was 1 year old. The boy, now 16, is in high school and doing well.

Liu has also financially supported four students so they could finish their schooling. In addition, on weekends she visits children who can't go to school because of severe disabilities.

In June, Liu was recognized by the Communist Party of China Central Committee as an outstanding member of the CPC. 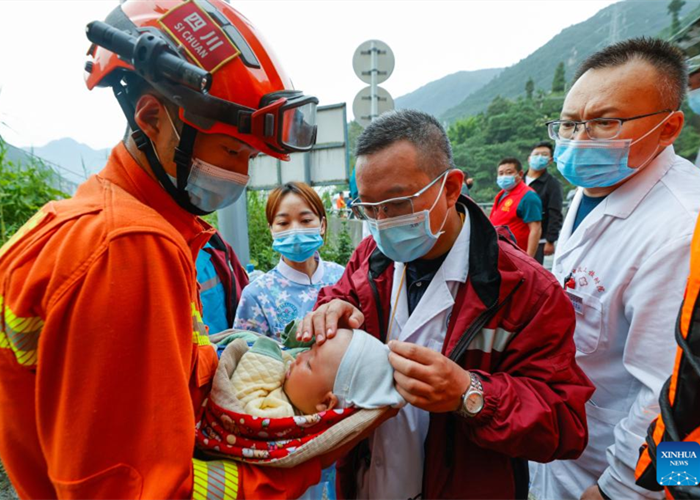