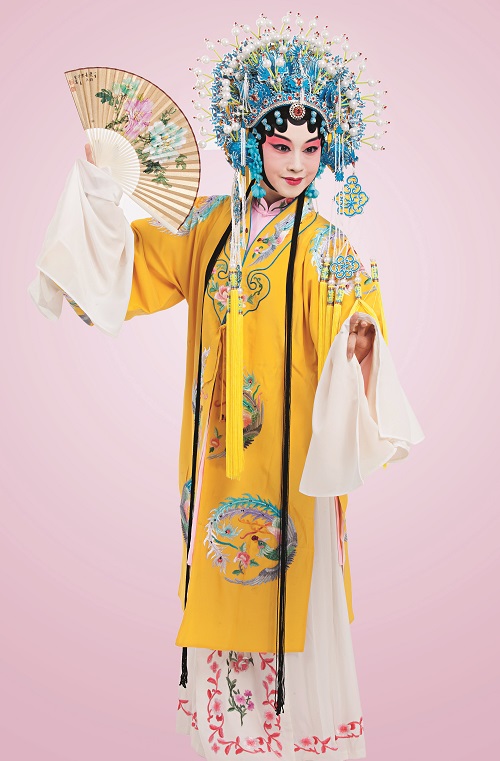 Zhou Haolu is a national, first-class performer, and director of the creation and research studio, with Northern Kunqu Opera Theatre, in Beijing. She has been dedicated for years to promoting the prosperous development of Kunqu Opera. Zhou was born into a prestigious family of Kunqu Opera artists, so it is only natural that she says Kunqu Opera is in her blood, and an inseparable part of her life.

Kunqu Opera, one of the oldest types of opera in China, dates back to the Yuan Dynasty (1206-1368). Kunqu Opera is referred to as the "mother of Chinese operas." It was previously called Kunshanqiang, as it originated in Kunshan, in East China's Jiangsu Province.

In 2001, UNESCO (United Nations Educational, Scientific and Cultural Organization) proclaimed Kunqu Opera as a Masterpiece of the Oral and Intangible Heritage of Humanity (a UNESCO program that ensures the best of every country's traditions are preserved and developed, as well as made known to the outside world).

Zhou was born into a family of artists; in fact, her parents and grandparents have long been accomplished artists in the performing arts. The three generations (including Zhou) of the family have devoted themselves to inheriting and promoting Kunqu Opera.

Zhou Chuanying (1912-1988), Zhou Haolu's grandfather, was a leading figure in Kunqu Opera. In 1956, he performed the lead role in the Kunqu Opera, Shi Wu Guan. It was a great success, and the show became popular nationwide.

Zhou Chuanying was invited to perform the opera in Beijing's Zhongnanhai. People's Daily published an editorial about the show, and raved of the show's value in reviving Kunqu Opera.

Zhang Xian (1915-2006), Zhou Haolu's grandmother, was known as the "mother of Kunqu Opera." She performed the lead roles in many famous shows of Kunqu Opera, including Peony Pavilion and Palace of Eternal Youth.

During the 1980s, the Northern Kunqu Opera Theatre invited Zhang and Zhou Chuanying to direct Kunqu Opera performers in Palace of Eternal Youth.

Nearly four decades later, in November 2021, Northern Kunqu Opera Theatre decided to produce a new version of Palace of Eternal Youth, with Zhou Haolu playing the lead, Yang Yuhuan, an imperial concubine of Emperor Xuanzong, of the Tang Dynasty (618-907). Zhu was named the director, and Zhou Shicong was named the art director. The play will be staged later this year.

When Zhou Haolu was a child, her grandmother taught her to perform various roles in Palace of Eternal Youth, and other plays. "My grandparents had taught students at home ever since I could remember. They had dedicated themselves to inheriting and promoting Kunqu Opera, and to cultivating Kunqu Opera talents," Zhou Haolu says.

In September 2019, Zhou Haolu's daughter, Li Yingyu, was admitted to the affiliated middle school of the National Academy of Chinese Theatre Arts, in Beijing. From Zhou Haolu's grandparents to her daughter, the passion for Kunqu Opera has become part of the family's genetic makeup.

There is a Chinese proverb that says it takes 10 years of practice off stage to perform for one minute on the stage. Zhou Haolu practices Kunqu Opera every day. "As performers, we should show our best side on stage. Kunqu Opera is my lifelong career … I have been deeply influenced by my family, since I was a child, and I always have a passion for Kunqu Opera," Zhou Haolu says.

She became a performer with Northern Kunqu Opera Theatre in 2006, after she graduated from the National Academy of Chinese Theatre Arts, in Beijing, with a master's degree in drama and traditional Chinese opera. She has since performed the lead roles in several Kunqu Opera plays, and she has earned the recognition of many Kunqu Opera experts. 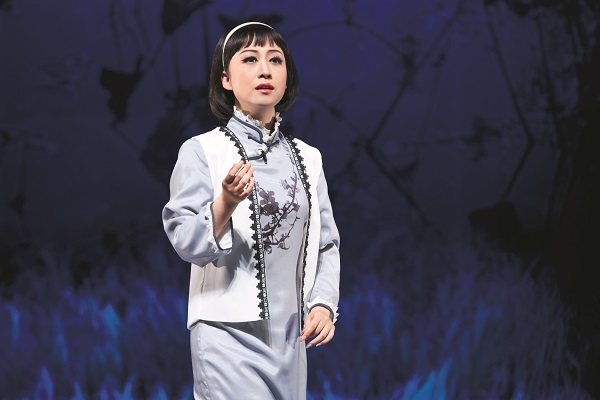 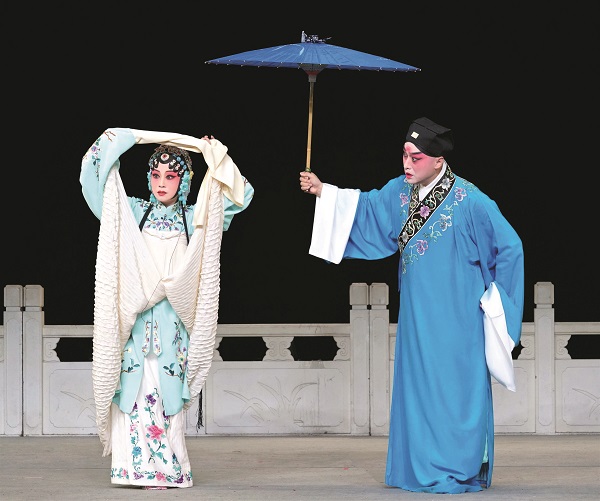 Zhou Haolu has made remarkable achievements in promoting and researching Kunqu Opera. At the age of 27, she wrote a book on phonology of Chinese opera, and that book was published by Chinese Opera Publishing House. The book has since become a necessary reference book for both Kunqu Opera performers and fans. Guo Hancheng, a master of Chinese opera theory, has spoken highly of Zhou Haolu, saying she is "a talented artist who excels in performing, writing and researching in the opera sector."

Zhou Haolu has many talents. For example, she can dance hip-hop and perform music drama. She has attended many international cultural-exchange activities, in several countries. In 2015, she performed a Thai dance, which incorporated Kunqu Opera style, during the welcome banquet for a Chinese-Thailand youth cultural-exchange project in Thailand.

In 2016, Zhou Haolu was invited to participate in an opera reality show in Las Vegas, the United States. The same year, she performed Kunqu Opera during the 21st Triennale International Exhibition, in Milan, Italy.

In 2017, as a representative who had made outstanding contributions to promoting traditional Chinese culture, Zhou Haolu's stage photo was displayed on the billboard of the NASDAQ Building, in New York's Times Square.

The same year, she performed Peony Pavilion, with musicians from Russia, France and the United Kingdom, during a concert at the University of Music and Performing Arts, Vienna, in Austria. Her splendid performance, which incorporated the ancient Kunqu Opera with Western music, was highly acclaimed by Viennese musicians and experts. 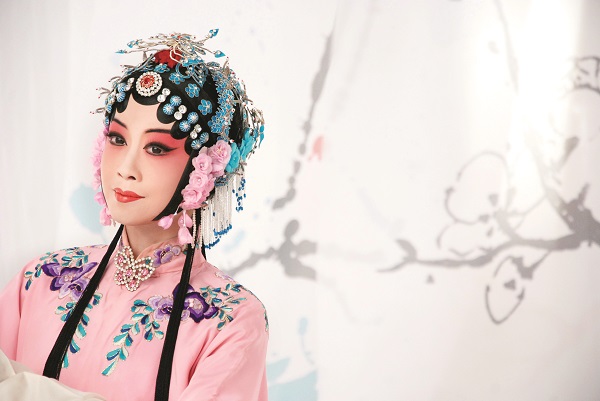 Zhou Haolu became director of the creation and research studio, under Northern Kunqu Opera Theatre, in September 2013. She has since dedicated herself to cultivating Kunqu talents. "Cultivating talents is an important way of inheriting Kunqu Opera," she says.

Her first apprentice, Xiang Lingxi, is a graduate of China Conservatory of Music, in Beijing. Xiang is responsible for managing Zhou Haolu's social-media accounts. Zhou Haolu's second apprentice, Ma Jingjing, gives Kunqu Opera classes at Peking University, and the classes are well-received by the students.

Zhou Haolu's third apprentice, Zang Haiqun, is president of the School of Cultural Communication at China Women's University. Zang has a deep love for traditional Chinese culture. Many students develop an interest in Kunqu Opera after they attend Zang's Kunqu Opera classes.

Ying Li, Zhou Haolu's fourth apprentice, is a teacher at China Women's University. Yang has combined Kunqu Opera with dance therapy during her teaching and research.

"I have also learned a lot from my apprentices. I feel more motivated to better inherit Kunqu Opera," Zhou Haolu says.

To help promote Kunqu Opera, Zhou Haolu has given more than 300 lectures at universities, theatres or institutions, at home and abroad. The lecture venues have included Peking University, Tsinghua University and Confucius Institute, at Rutgers University, in the US. The lectures give people opportunities to understand and develop an interest in Kunqu Opera.

To attract young fans to Kunqu Opera, Zhou Haolu has created an account on WeChat, a popular social-media platform, and she has posted articles on the platform. She also does livestream programs on Douyin, a popular short-video and livestream platform known abroad as TikTok.

In March 2020, when all offline shows were cancelled due to the COVID-19 epidemic, Jinfengtai Art Fund of China Soong Ching Ling Foundation invited Zhou Haolu to hold online lectures on Kunqu Opera. Four months later, a combined 120 lectures were available on Ximalaya, a leading audio-sharing platform in China.

In 2021, Zhou Haolu shared her family's story of inheriting and promoting Kunqu Opera during a livestream activity, which attracted more than 9 million viewers.

"Born into a family of artists, Kunqu Opera is like my breath, my blood. Inheriting Kunqu Opera is my lifelong responsibility. I will use my lifetime to safeguard, inherit and revitalize Kunqu Opera," Zhou Haolu says. 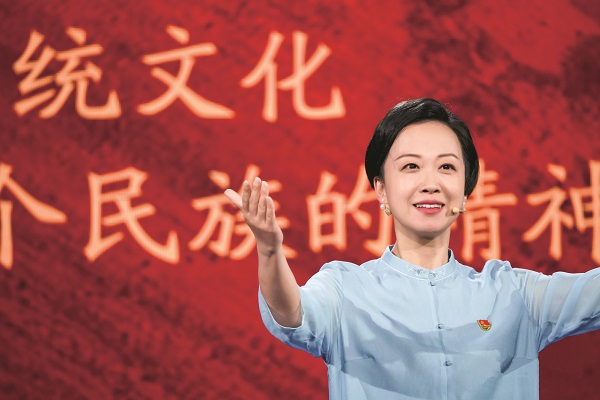