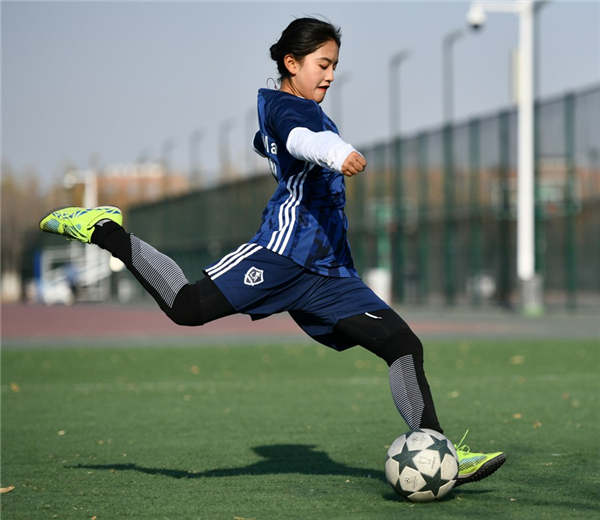 Pubu Droma playing football on the campus of Nankai University in Tianjin on Nov 28, 2019. [Photo/Xinhua]

Eighteen-year-old Tibetan girl Pubu Droma and her teammates have often shared exercise video clips, football-related articles and online games with each other on Chinese social media platform WeChat over the past few months.

Currently unable to play football due to restrictions linked to the COVID-19 epidemic, this women's football team from Nankai University in North China's Tianjin have instead moved the football pitch onto their smartphones.

"We cannot play football together, but we never stop practicing our skills, even if we live in different cities in China," said team captain Pubu Droma.

Trying to allow more girls to feel inspired by football was a frustrating endeavor for Pubu Droma, but she stood by her passion and did a lot of work.

As a 2019 freshman with an enthusiasm for football and good skills, Pubu Droma became the striker and captain of a men's football team at Nankai, and signed up for her school's freshmen football games as soon as she enrolled.

However, Pubu Droma's inclusion was not without controversy, as she was initially refused admission to the team due to her gender, and was ridiculed by several of her peers.

This upset Pubu Droma, but the school's football association decided to give her another chance and organized an online vote among the captains of all participating teams.

Pubu Droma received many votes of support from other players and finally got the chance to be the only female player in a men's team. She soon won over the doubters with her skills and enthusiasm on the pitch, in the process breaking down barriers and gaining respect.

"Football is a team game regardless of gender. Everyone has to do their best for their team's honor and victory, as well as doing what they love," she said, noting that she did not want to be the only girl on the pitch. 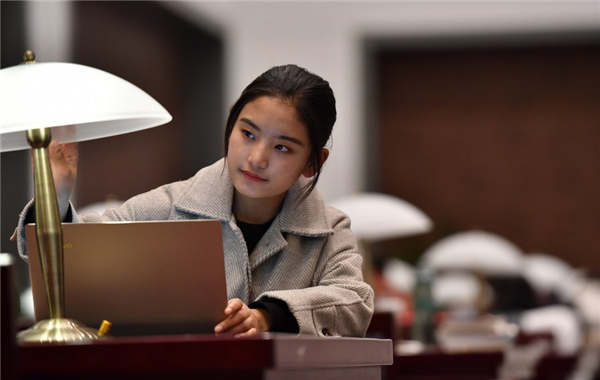 Pubu Droma studies in the library of Nankai University in Tianjin, China on Dec 6, 2019. [Photo/Xinhua]

After this game, Pubu Droma decided to establish an exclusive girls' team for female football lovers at her college, which began life in November 2019. "I didn't expect to see so many girls at our school loving football. About 50 girls joined in the group and we conducted regular training sessions at weekends," she said.

However, the sudden epidemic outbreak halted their training plans. "I was anxious and so worried at that time. What if this long-term epidemic drained their enthusiasm? What if the newly-formed team was broken up?" Pubu Droma worried.

What her teammates did gave her great confidence. "They trained voluntarily and our chat group became more active. In the meantime, all my girls were in full swing in making the informal team become an official one."

When they prepared the project proposal for the official team, Pubu Droma raised a question to her teammates, asking them what their football dream is.

"To let people see us playing football in professional games."

Their answers greatly warmed Pubu Droma. She summarized these points in the project proposal. "Our team's dream is to organize an official school women's football team and create a new platform for more female football lovers. We encourage each other and make progress together."

In June, these girls realized their dream. The women's football team at Nankai University was launched. "We want to recruit more girls into our team and have opportunities to participate in national competitions in the future," said Pubu Droma.

Pubu Droma and her teammates hope the epidemic can be overcome soon, so that they can return to school as soon as possible and realize their football dream.

"I love football and hope it will spring up everywhere," she said.