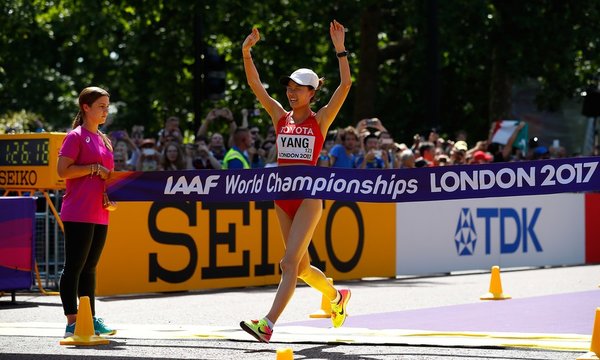 Yang Jiayu of China celebrates as she breaks the tape during women's 20km race walk at the 2017 World Championships in London, Britain, on Aug. 13, 2017. [Xinhua/Wang Lili]

In what was the first on-site national athletics competition held in China since the coronavirus outbreak, the 24-year-old Yang from Team Bayi, who took the gold medal at the 2017 World Championships in London, led almost from the gun to finish to break tape in one hour, 30 minutes and 22 seconds.

Yang spearheaded a leading group of six race walkers after the first lap of the one-kilometer course that stretched alongside the scenic Xiaoling river in the northeastern Chinese city. The leading group was soon cut to three athletes - Yang, 2019 World Championships runner-up Qieyang Shijie and 2014 Youth Olympic champion Ma Zhenxia after the second lap.

The reckless Yang tried to pull away after three kilometers but was soon caught by Qieyang as the duo kept pushing ahead to extend the gap from their chasers. After a fierce see-saw battle in the following four kilometers, the 29-year-old Qieyang had to quit the title contest with a thigh muscle injury.

Yang slowed down a little bit afterwards but still managed to maintain a comfortable sole lead all the way to the finish.

"My goal for the race is to win the title although the result today was not quite satisfactory for me," Yang said. "After such a long time of training without competition, I really need to win this race to motivate myself."

"Since the women's 50km is not an Olympic event, I choose to do the 20km event in order to compete in the Tokyo Olympics. But I still have a long way to go and need to further improve my result," said Liang. 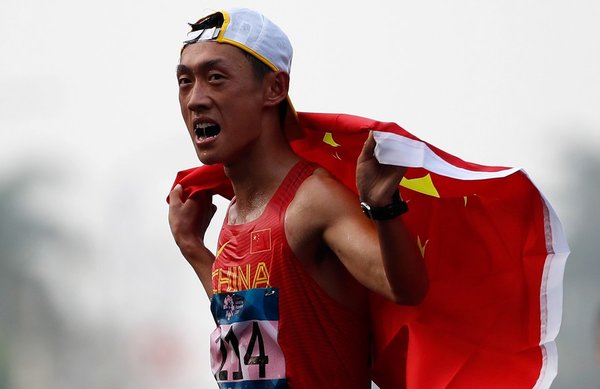 Wang Kaihua of China celebrates after the men's 20km race walk at the 18th Asian Games in Jakarta, Indonesia on Aug. 29, 2018. Wang won the gold medal at the event. [Xinhua/Wang Lili]

The men's 20km and 35km events were contested under rainy conditions on Wednesday morning. The 26-year-old Wang from Guangdong showed solid form as he broke clear in the early stages of the race and barely met any challenge before taking the 20km victory in 1:19:46.

"It has been quite a long time since I last took part in an official competition. I just want to test the effect of my training in the past months," said Wang, who clocked 1:22:04 to claim the 20km title at the 2018 Asian Games in Jakarta, Indonesia.

"I did not expect it would rain so heavily. My pace was kind of hampered by the rain. But all in all, I am satisfied with my performance today," he added.

Zhang Jun of Yunnan trailed more than three minutes behind Wang to finish second in 1:22:52, while Zeng Qingcun from Shandong took third place in 1:23:15.

"Last year I did not compete well at the World Championships. I was defeated by the extreme heat and humidity there, and the failure still makes me feel regretful until now," Wang said, referring to his eighth-place finish in Doha, Qatar last October.

"There is still one year to go before the Tokyo Olympic Games. I will make good use of one more year to better prepare myself."

The men's 20km race also featured 2012 London Olympic champion Chen Ding, who came out of retirement in 2018 but is still struggling to find his best form. The 27-year-old Chen only clocked a lackluster 1:29:42 to finish 27th. Cai Zelin, silver medalist at the 2016 Olympic Games in Rio, received four red cards and failed to finish the race.

A total of 95 athletes from 17 teams took part in the one-day competition. According to the Chinese Athletics Association, all the athletes, coaches and team staff are required to arrive in Jinzhou with a negative COVID-19 test result within seven days, and to take a second test in the hotel before checking in as part of pandemic prevention and control measures.