Tianjin, A City Where Historic Legacy, Modernity Come Together Tianjin in some ways is a testimony in stone to different periods throughout China's history, an important element in the growth of heritage tourism. The city today presents a successful blend of striking modernity within a complex historic framework. It is truly fascinating to walk slowly around, admiring the architecture, thinking about its story and of course doing photography.

Tianjin, the city's uniqueness is apparent on exiting its central railway station. Beyond a spacious concourse, futuristic skylines rise above the tranquility of Haihe, Tianjin's mother river. Spanning the waters stretches French-designed Jiefang Bridge, opened 1927. It leads directly into an avenue of grand European-style architecture.

Evening river cruises are a popular way to appreciate more of downtown charms. A pleasurable way to understand why contemporary Tianjin is referred to as City of Lights and City of Bridges. The riverscape is simply a panorama of multi-colored illumination. However, Tianjin that we see today was not always like this. Its growth relates to a combination of geographic, human and historic factors. Regarded as "relatively young" compared for example, to Beijing. The land on which the city stands is of river-borne sedimentary deposition where once was sea. Over centuries, reclamation and drainage has built up the ground surface. However, the area, low lying, remains criss-crossed by a maze of waterways, some manmade, others natural. Surrounding wetlands and the Haihe itself are major destinations for migratory birds from distant northern Asia. Increasingly they have become spring attractions for the city.

The Haihe runs only 70 kilometers from downtown to the Bohai Gulf. However, it represents the final segment of five much longer rivers, the largest water system of northern China. The Grand Canal historically connected much of eastern China with the imperial capital, Beijing. Close to 120 meter tall Tianjin Eye ferris wheel, the canal intersects with the Haihe allowing access to and from the sea.

Throughout much of its history, Tianjin was effectively a gateway to Beijing from both the ocean and canal. As land alongside the Haihe started drying out, settlements were appearing, relying initially on water transportation. The Grand Canal, during Yuan Dynasty (1206-1368), underwent realignment and deepening. This led to Zhigu, a walled garrison town at the apex of the waterways, growing wealthy due its monopoly of the lucrative salt trade. It also rose in prominence as a port and commercial entity. 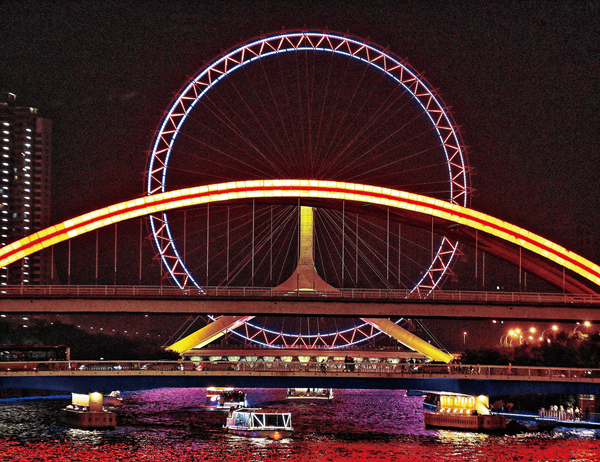 Ming Dynasty (1368-1644) witnessed real growth. Zhigu was renamed, Tianjin (Heavenly Ford) in 1404. The city would continue to expand, emerging by the Qing Dynasty (1616-1911) as a leading economic center of northern China. Drawings from that period show a tangle of boats and barges shuttling between coast, canal and capital loaded with goods and people.

Although today much of the earlier urban landscape has disappeared, it is remembered by street and district names. However, some fine temples and grand mosques remain. The city's Ancient Cultural Street is an attempt at creating a tourist zone themed around its early history.

By the mid-19th century, Tianjin's growth and geographical location was attracting attention of western countries looking to increase their foothold in China. During the Second Opium War (1856-1860), a treaty extracted from then Qing government in 1858 initially allowed Britain and France to establish concession areas in Tianjin. While diplomatic legations were set up in Beijing, commercial business was concentrated in Tianjin along with many domestic residences. The initial concessionary areas were downriver from the early city, along what had been marshy river banks. Other countries would later join in until there were nine such districts in total, occupying a considerably larger area than that of the original walled city. 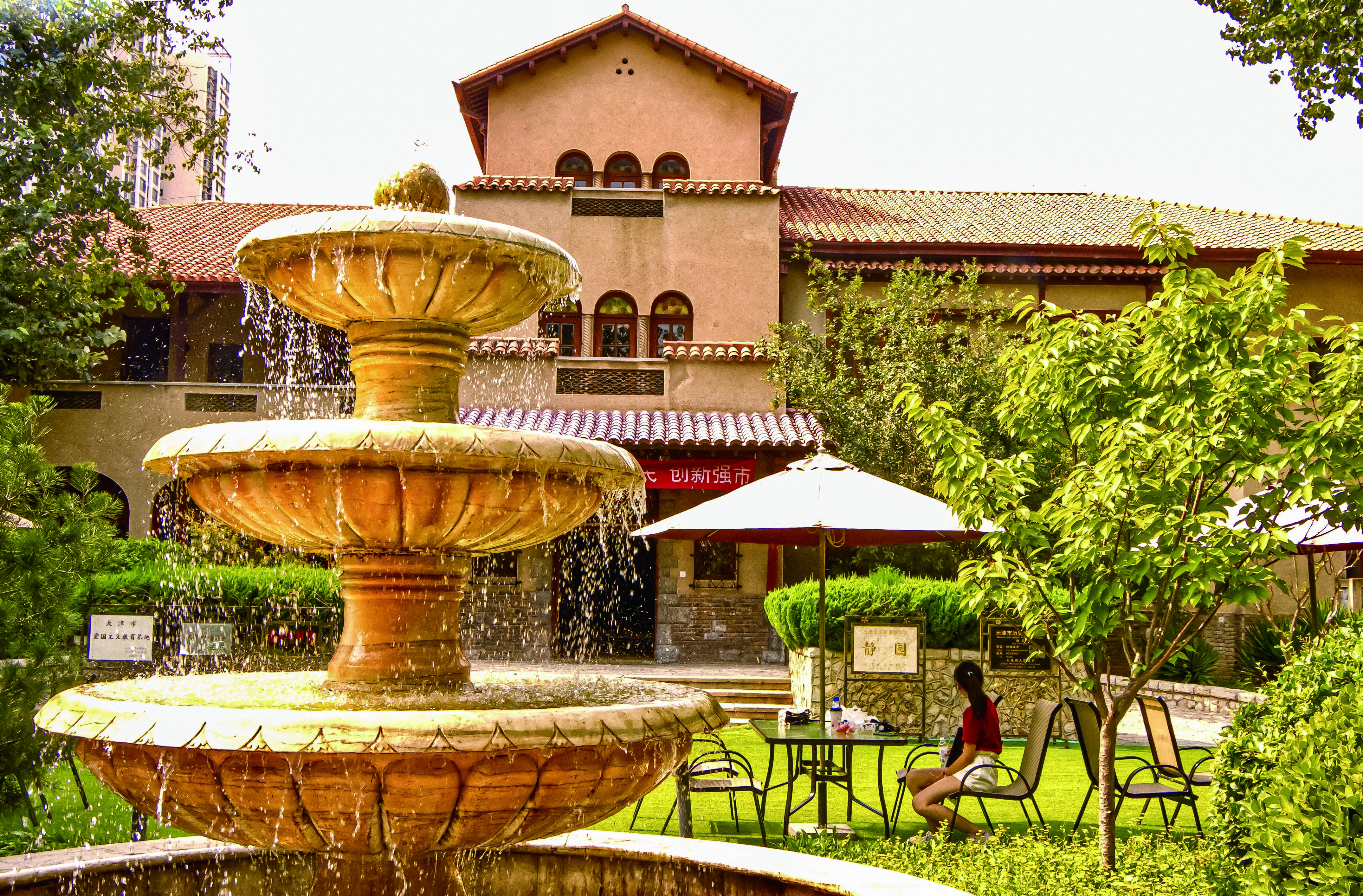 The effects on Tianjin's appearance and life were profound. The concession areas have left Tianjin with a significant legacy being promoted today as a "museum of 19th/early 20th century architecture." Rapid construction saw trading houses, banks, schools, churches and more springing up around the city in a range of building styles. A mixture of Corinthian, Victorian and even Neo-Venetian forms emerged including art-deco department stores and a theatre. Much dated from the 1920's. The city boasted trams, electric light and a cosmopolitan feel on a par with that of Shanghai.

Tianjin would become a major player in international trade and commerce. Running north to south through both the French and British areas the main artery is today's Jiefangbei Road. Previously it was known as Rue de France and Victoria Road. A major player in international finance and commerce, by the early 20th century it was referred to as Asia's Wall Street. Western banking was introduced initially by HSBC (Hongkong and Shanghai Banking Corporation Limited). Major trading companies led by Jardine Mathieson and Swire established a presence. Their former office buildings still stand on Jiefangbei Road.

Tianjin even became a transit point of quality leather from Inner Mongolia Autonomous Region's Baotou for export to United States. Sugar from southern China was distributed through Tianjin to northern areas of the country. Much, much more went through the city's quays and warehouses stretching along the Haihe. Considerable areas within the former concessions have in recent years been carefully renovated and tastefully illuminated. At night it allows for a very pleasant stroll down memory lane. The high-end international hotel, the Astor, opened in 1863 on Jiefangbei Road. Still operating, its original "heritage" building retains the feel of a grand British country manor house. A basement museum recalls its role as a center for diplomatic gatherings and many social events including frequent dance parties. A regular at such was the last emperor Puyi (1906-1967). He lived in Tianjin, within a grand Spanish-style villa, known as the Garden of Serenity on Anshandao between 1925 and 1931. Today it's another of the city's must-visit attractions.

Avenues within the former French concession, such as Binjiangdao and Heping Lu are delightful, pedestrianized shopping areas. The area boasts some excellent examples of art-deco design.

Unlike Shanghai, there was no grand Bund or waterfront. Instead, Tianjin's riversides were bustling with shipping-related commercial activity. By the mid-20th century the river banks were increasingly abandoned. Recent years has witnessed its transformation into a linear corridor of parkland and recreation. Somewhere to watch local people fishing, year-round. 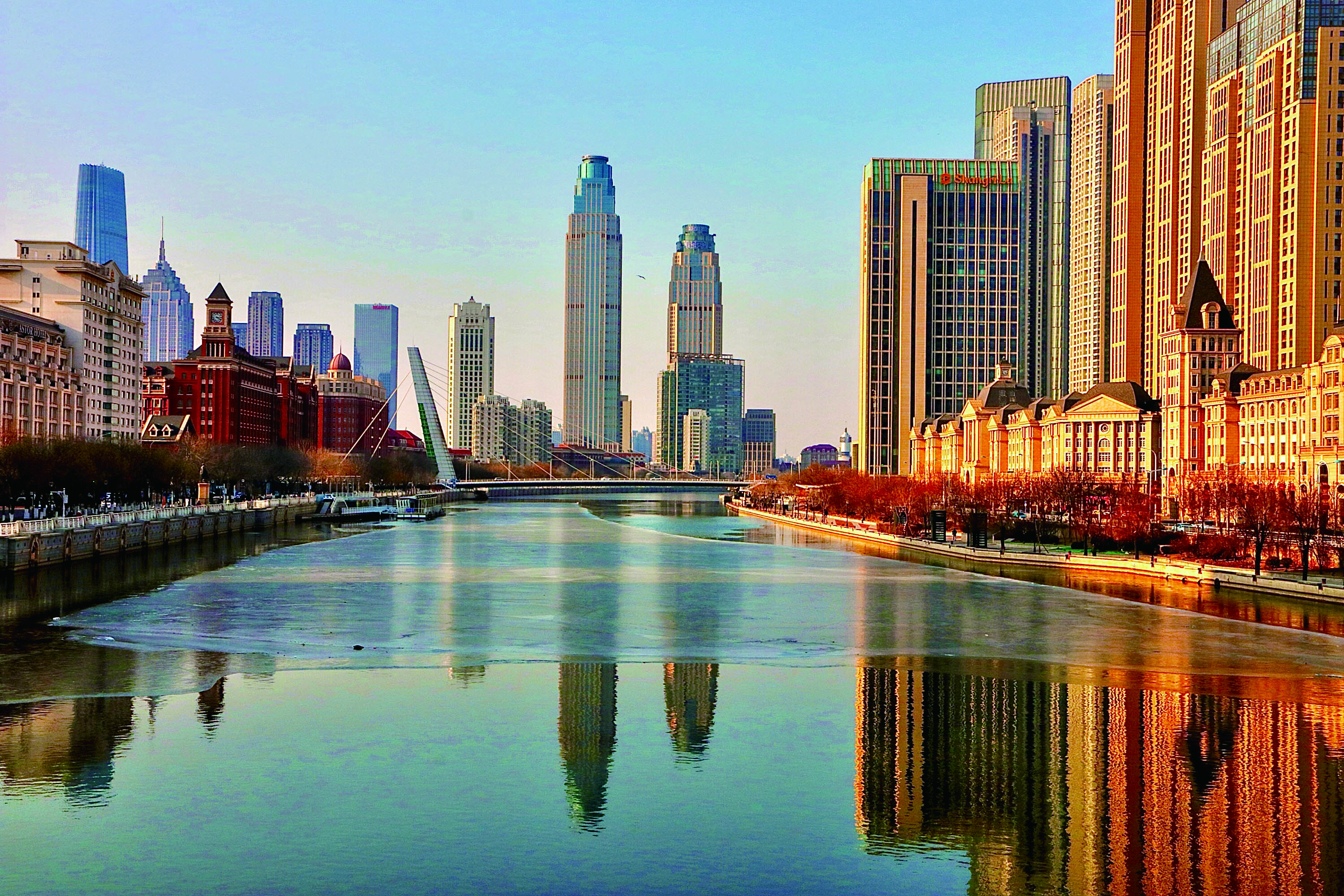 The development of cultural centers has been noticeable along with the renovation of older downtown commercial and shopping areas while also promoting a nighttime economy.

Tianjin and Beijing were the first two cities in China to be connected by high-speed rail, in 2008. Today, the city has excellent connectivity, both domestic and internationally.

Larger cities such as Beijing and Shanghai have seen demographic changes with large influxes of migration from across China. This has not happened to the same extent with Tianjin, a significant proportion of the population are native to the city. Tianjin has a quite relaxed, pleasant feel — something increasingly attracting weekend and longer stay vacationers. In response, leading international hotel brands, some offering outstanding views of the Haihe, provide excellent levels of hospitality. Having the river flow through its city center is certainly a major asset in Tianjin's attractiveness.