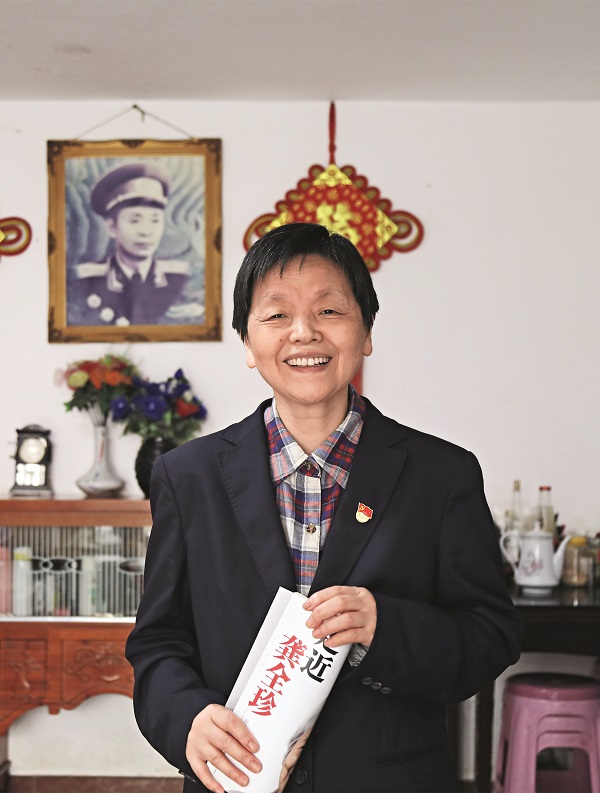 Gan Gongrong is a part-time Vice-President of Jiangxi (in East China) Women's Federation and Vice-President of Jiangxi Women's Voluntary Service Association. She is the third daughter of Gan Zuchang (1905-1986), who was a major general in the Chinese People's Liberation Army, and Gong Quanzhen, who was named a national moral model in 2013. Following her parents' guidance, Gan Gongrong has dedicated her life to her career. She has also inherited and promoted her family's "red gene."

During the presentation of awards to the national moral models in Beijing, in September 2013, Chinese President Xi Jinping met Gong, who was nominated for an award. Xi said he was excited to see the 90-something Gong, wife of the late general Gan Zuchang.

In 1928, Gan Zuchang joined the Red Army. Given his miraculous feats in various battles, the Chinese Government accorded Gan Zuchang the rank of major general in 1955. As he was injured while at work, Gan Zuchang resigned his military commission two years later. Within a short time, he returned to Yanbei, his home village (in Lianhua, a county in Pingxiang, a city in Jiangxi Province), to work on a farm.

During the past several decades, Gong has devoted herself to promoting rural education (in Jiangxi). Influenced by Gan Zuchang and Gong, Gan Gongrong and her siblings have remained honest and self-disciplined when they have performed their official duties. Numerous Chinese have been impressed by the ardent enthusiasm for and unwavering dedication (of the elderly couple and their children) to the cause of building China into a prosperous country. Contributing to Society as Farmers

Gan Zuchang was born in 1905 into a farmer's family (in Yanbei). Despite his miraculous feats in various battles, he cared little about fame and wealth. One day, when she was a little girl, Gan Gongrong heard her father say to her mother, "Compared with the revolutionary martyrs, who shed their blood and sacrificed their lives for the cause of national liberation, my contributions (to society) are too small to mention. I have received too much honor."

Gan Gongrong remembers, when she was a kid, how her father urged her and her siblings to work hard, when all the villagers and their children worked together (for example, harvesting crops for the commune) in the village.

Her father's earnest words touched her heart: "Why can't we try our best to contribute to society as farmers?"

Shortly after Gan Gongrong graduated from her junior-middle school (in 1974), she gave up the opportunity to pursue her studies, and began learning from area farmers how to do farm work.

Given her diligence and wisdom, she quickly honed her skills. Given her outstanding work performance, villagers elected her a leader of the village several years later.

From 1978-1981, Gan Gongrong worked as a projectionist on the film projection team (in Lianhua). During the following 16 years, she was employed by a local bank, as a clerk. Given her outstanding work performance, she received prizes at the national, provincial and municipal levels.

In 1986, Gan Zuchang died. On his deathbed, he exhorted his wife and children to use his salary to buy chemical fertilizer, to help promote the village's agricultural development. Deeply touched by her father's words, and by his decades-long dedication to helping rural residents (of Lianhua) live better lives, Gan Gongrong was determined to follow in her father's footsteps and work for the well-being of the residents. 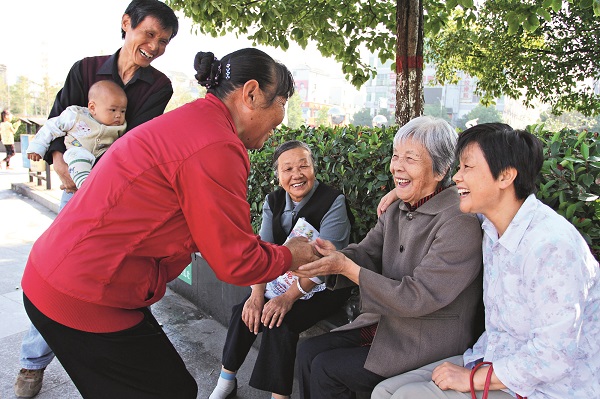 Gan Gongrong is warmhearted, and she is always ready to help others. During the past decade, she has recruited more than 20 volunteers to provide companion and academic instructions to disadvantaged children (including orphaned and left-behind children, whose parents have left home to work elsewhere) in Chengbei Primary School (in Lianhua). Gan Gongrong has also arranged for psychologists to provide consultations to the children. Over the years, Gan Gongrong has saved money, by scrimping on her daily expenses, to provide more than 100,000 yuan (US $15,385) to disadvantaged children.

Every year around International Children's Day (on June 1), Gan Gongrong offers school-related accessories to disadvantaged children (in Lianhua). Gan Gongrong chats with elderly residents, who live alone, and provides financial assistance to the elders, during her visits with them every year around the Double Ninth Festival (the ninth day of the ninth lunar month and a special day to show respect to the elderly).

"I'm delighted to help others. As Mom puts it, 'Helping others makes you happy'," says Gan Gongrong. 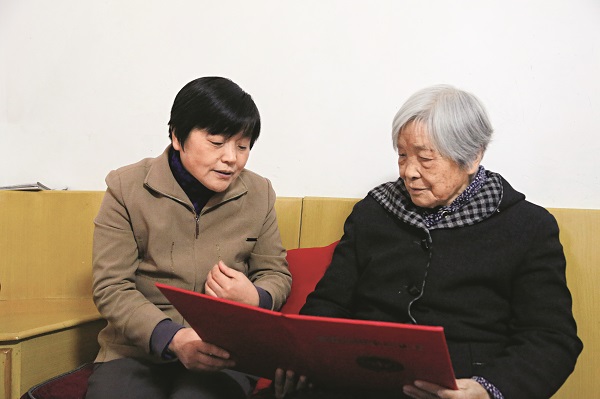 In 2011, Qinting, a town in Lianhua, established Gong Quanzhen Work Studio. The studio invites Gong to give lectures to residents, to promote the Party (Communist Party of China)'s traditions of revolution. Within a short time, Gan Gongrong began leading the studio's volunteers in providing voluntary services to residents, to help the residents solve difficulties in their lives. During the past decade, various regions of the country have set up Gong Quanzhen work studios, to promote the Party's traditions of revolution among residents, and to offer various convenient services to residents. 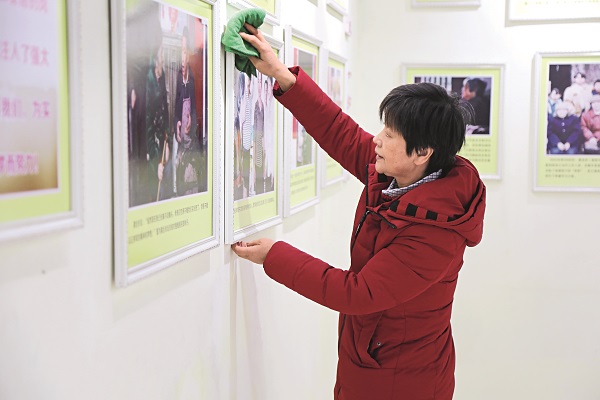 In 2013, Gong established Gong Quanzhen Charities Aid Foundation in Qinting. Now, Gan Gongrong has picked up the "baton" (of managing donations to impoverished residents) from her aged mother. During the past several years, the foundation has raised nearly 1 million yuan (US $153,846), all of which has been used to assist more than 100 impoverished residents and children from poverty-stricken families.

Since she established Lianhua Women's Volunteers' Association, in 2019, Gan Gongrong has provided nearly 8,000 hours of voluntary services to disadvantaged residents (including disabled and/or impoverished residents, and elderly residents who live alone). Nearly 1,000 residents have joined the association. 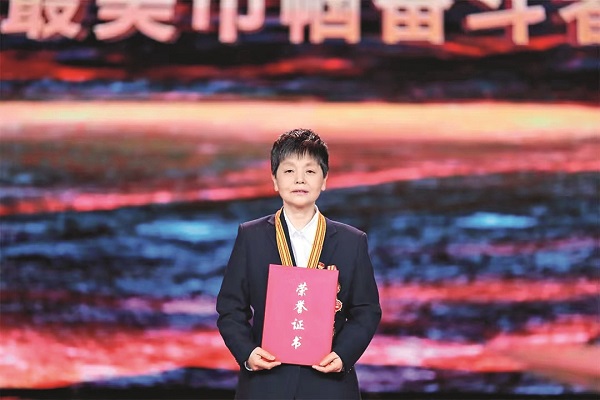 During the past several decades, Gan Gongrong has dedicated herself to inheriting and promoting her family's "red gene."

At the invitation of China Executive Leadership Academy Jinggangshan, Gan Gongrong in recent years has given lectures regularly to cadres (from various regions of the country), to help them improve their ability to better serve the people. During the lectures, Gan Gongrong has shared the story of Gan Zuchang with the cadres. So far, about 10,000 cadres have attended the lectures. Many cadres have been impressed by Gan Zuchang's hardworking spirit, and by his selfless dedication to the Party's cause.

At the academy, Gan Gongrong and several children of Chinese martyrs have encouraged each other to follow in their seniors' footsteps, and to work diligently and try their best to help others.

Gan Gongrong is a key member of Ganpo Red Detachment of Women (in Jiangxi). The organization's members — composed of outstanding women, from all walks of life in Jiangxi, and cadres with women's federations, at all levels in the province — share their experiences in working hard to realize their potential, and in achieving success in their careers. The members also share their experiences in taking advantage of their unique roles in promoting social development, and in advocating both family virtues and good family traditions.

During the past several years, Gan Gongrong has shared, both online and offline, stories about her parents with more than 8 million Chinese across the country.

"I often take my son and daughter-in-law to participate in public-welfare activities, and activities to promote the 'red gene' of residents' families. I hope the good family traditions will be handed down from generation to generation," says Gan Gongrong.

In 2016, Gan Gongrong's family (in which Gong lives) was selected one of the families that have good manners in the country. Given the remarkable achievements in her work, Gan Gongrong in recent years has received accolades and special titles, including National Model Worker and National March 8th Red-Banner Pacesetter. She vows to make greater efforts to promote her family's "red gene."