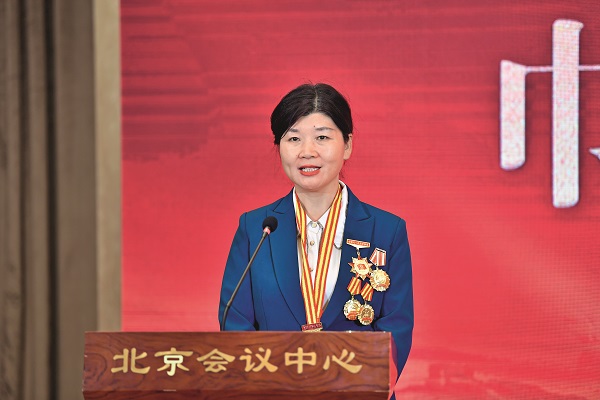 Lü is well known for her strawberry-planting business. In 2009, she relocated from Beijing to her hometown, in Mengjin County, in Central China's Henan Province. Since then, she has led her fellow villagers in establishing 32 agricultural-production bases — specializing in planting strawberries — in Mengjin. She has helped more than 5,000 residents find jobs, and she has encouraged them to use the planting of strawberries to create wealth.

Since 2012, when she opened her company, Luoyang Long Hao Agriculture Limited, Lü has explored a production mode that combines her company's business with the work of cooperatives, production bases and farmers. She has also invested more than 6 million yuan (US $923,077) to build tourist gardens, in which visitors can enjoy sightseeing and try picking strawberries.

Before she attended the fifth session of the 13th NPC, in Beijing in March, Lü conducted considerable research in her hometown to learn local farmers' needs in agricultural production.

As a result of her research, she realized many farmers knew little about growing techniques, and many lacked adequate management skills. Many of the farmers had a difficult time accepting innovative production techniques.

Workshops should be established to make it easier for experienced "talents and experts" to work in villages, she adds. She is also dedicated to improving women's work ability at the grassroots level. She says women are capable of making great achievements in rural revitalization.

Lü says, in her opinion, women cadres have advantages, such as their tenacity and dedication to being careful, when they deal with problems in rural areas. Lü suggests training provided to women cadres, at the grassroots level, should be enhanced, so the women can improve their work ability through continuous learning. As a result, she adds, women cadres will be able to hold up half the sky in rural revitalization.